NOTICE THE SOSBOWSER.CA CAMPAIGN VOLUNTEERS WANT YOU TO KNOW THE CAMPAIGN FOR SUITABLE SEWAGE TREATMENT IS STILL VERY ACTIVE. THIS IS NOT OVER YET! 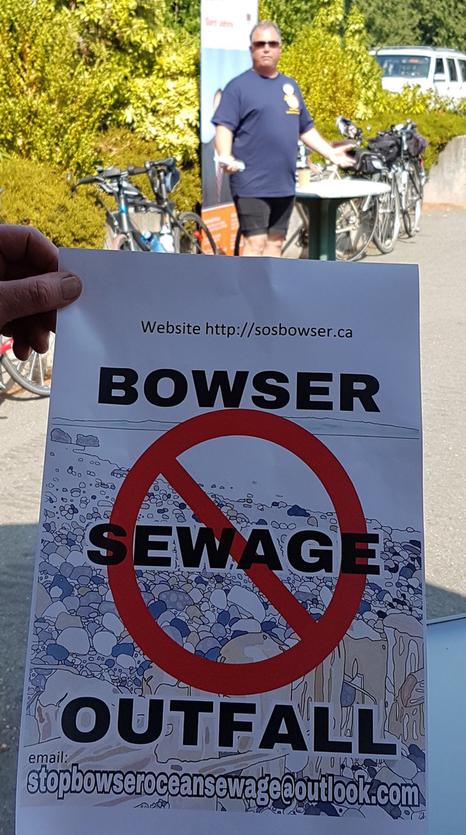 The process of public consultation on the Bowser waste treatment proposal began in 2017 and culminated with the Regional District of Nanaimo (RDN) shutting down the project in the spring of 2019. "Nobody opposes community sewage collection systems but they do question where the treated effluent pollutants go," says Bryan Holyk, Executive Director, Area H Rate Payers Association.

The process being touted for Bowser by the RDN involved Canadian and BC waste water grant money of $7.6 million, and the grassroots movement believed the funds should have gone to protective technology, says Holyk, speaking on behalf of SOSBOWSER.ca, a volunteer organization running a simple campaign to stop a poorly treated ocean sewage outfall into the Salish Sea, "It worked out to be over $100,000 per house in the petition process after the service area was created with conveniently drawn boundary lines drawn to encompass a few properties."

The way it turned out, "One hundred property owners were given a say over multiple millions earmarked, basically, on the promise that the population of the Village of Bowser would densify," says Holyk, with no guarantee that's going to happen. Those are some very expensive toilets.

The proposal for Bowser waste treatment involved a big pipe and an expandable plan for the sewage outfall into the Salish Sea, also known as the Strait of Georgia, and the area affected includes adjoining waters such as Baynes Sound on the East Vancouver Island Side, near Bowser.

Holyk points out shellfish farming in the province has become a good-sized economic driver. "There are established facilities on Vancouver Island from top to bottom on the Inside Passage, and a very market-oriented concentration of facilities and farm-sites is found in what Regional District of Nanaimo calls Area H, within which Bowser lays. Fifty percent of the shellfish farming industry is found in the waters off Area H. We need to think about the present, and future, protection of these waters and beaches."

From the start, the SOSBowser grassroots committee intended to stop plans for waste water disposal of effluents in a pipe that extended 2.2 km offshore (and 400 m from one of the largest open-water scallop and oyster farms in Canada at Bowser!). Holyk says politicians were tone-deaf to hearing concerns of residents up and down the coast from Parksville to Comox.

"We had no difficulty organizing. We saw 200 and often 300 residents at public meetings who were vehemently opposed to the plans to partially treat sewage before dumping it in the ocean, while the RDN kept going (inexorably) ahead with their plans. Then the municipal elections took place which became a referendum versus ocean sewage," and the incumbent was trounced. Stuart McLean won with 68 percent of the vote compared to William Veenhof's 32 percent. "Veenhof was also the chairman of the RDN board. So his defeat was a pretty big message to Nanaimo."

Holyk says, "We aren't a political association. We do education and talk to residents through mail-outs." The level of public awareness about the issue was greatly enhanced by a simple act of printing a couple hundred white-backed, red-and-black lettered lawn-signs handed out to residents especially visible along the Oceanside Route (Hwy 19A).

The 'take-up' of the offer to publicly express dissatisfaction with the plan for a sewage outfall was remarkable. "We started by printing 50, we ended up seeing over 200 SOSBOWSER STOP OCEAN SEWAGE signs on the highway. All the time we were writing letters to government offices and newspapers." Federal and Provincial politicians remained mute on the issue.

Then this happened suddenly, as widely reported, including in (www.lintelligencer.com/cholera-outbreak-affects-four-people-near-qualicum-bay-1173-2018/) -- "Mar 24, 2018 · Cholera outbreak affects four people near Qualicum Bay Island Health is warning the public not to consume herring eggs that were harvested from French Creek to Qualicum Bay," and other media outlets. There had been a case of people getting sick and treated from eating the herring eggs that are believed to be contaminated with Vibrio cholerae . . ."

Holyk says, "We had recorded over 500 cases of Norovirus from Canadian oysters in the last couple of years so no one was listening to a health crisis in the making. We needed to act!"

The source of the pathogenic disease in herring eggs has been variously blamed on leaking septic sites and large rainfalls, meanwhile very little is known in fact about the actual cause. "We support the initiative in the Official Community Plan to have mandatory septic tank inspections, but promulgating the lie that shellfish poisoning is coming exclusively from septic tank failure is unacceptable, particularly since no scientific monitoring has been done here!

"My septic field works," as do the vast majority of septic fields and tanks in rural Vancouver Island, says Holyk, "They're asking people to decommission their septic fields and tanks and replace them with $1500 macerating pumps, utility fees, and Bowser debt," to pump partially treated waste in an outfall off-shore, or be trucked down the highway for treatment and dumping at French Creek (North Parksville), which is reportedly over-capacity and already involves unmanageable daily smells from the process.

On the 26th of March 2019 the RDN officially cancelled the project and promised to revise the Official Community Plan. "We are hoping for a bylaw to prohibit disposal of wastewater in the sea as a Vancouver Island 'first.' We are concerned with the nature of the area, shellfish producers and tourism operations.

Holyk believes the regulations at the federal and provincial levels are the problem in terms of dealing with emerging effluent issues. "Governments don't champion ocean protection, they react to their pollution permits!. So the question comes up. Who is going to speak about it?" 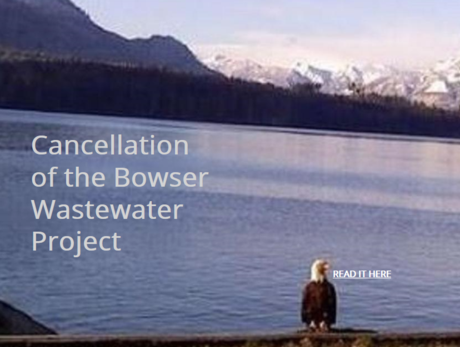 Who Champions Ocean Protection in Kanada?