On Friday November 30, 2018, the community of Klemtu, British Columbia, was deeply saddened at the passing of Percy Starr. Percy will forever be known as a respected Kitasoo/Xai’xais First Nation elder and Order of Canada recipient, and a large influence on Klemtu’s recent history.

For our staff at Mowi, Percy can be thanked for the part he played in providing regular earnings for 55 families in the small, remote village. But he also gave us all a lot more.

When I first walked into Percy’s band manager office in 1997 – as a young production manager ready to build the beginning of a collaborative business venture – I was met by a man who would command my attention for the next 20 years.

Whenever I returned to Percy’s office, I wondered if Percy actually liked me, as he could be very hard on your nerves. I received an answer to my question many months into our relationship when, after grilling me once again about one of my business decisions, he walked over to me and patted me on the back, with a wink. Years later, I got further confirmation he liked me when he came over to my table at a community dinner, and said, “Hey, young punk, you’re a good guy. You know that, right?”

Clearly, given I’m writing about this now, I really needed Percy Starr to like me. So much in fact, that I seemed to have made it a career goal.

But it was exactly that tough characteristic that made Percy such an admirable man, and ensured his first priority was taken care of: Kitasoo/Xai’xais members. The decision to dive into salmon aquaculture was never an easy personal decision for Percy – he was a proud commercial fishermen. But after watching the village’s fish processing plant shut down decades before, Percy’s leadership group allowed for the village to vote on whether to start its own salmon farm. In the mid-1980s they voted ‘yes’ – Klemtu was the first Nation to own and operate its own salmon farm. By the mid-1990s, Klemtu made the decision to seek a business partner to help ensure their aquaculture venture could compete on the global stage.

A generation later, this business venture continues to prove itself. Not that Percy would have needed to prove anything. But I am so happy that for many years Percy got to watch, from his window on the south hill, fish farmers make the walk to the town’s centre float to catch a ride to the farms, and plant workers migrate to the north end of town to process the daily salmon harvest. He was, understandably, very proud.

Perhaps Percy’s contribution to the people of Klemtu is best described by his Order of Canada: “By striving to re-establish the community of Klemtu when the local fish processing complex closed, he has created a prototype of sustainable economic development based on self-sufficiency and co-operation between aboriginal and non-aboriginal peoples. His community now serves as a successful model for self-renewal of First Nation communities, blending the best of the old culture with the best of the new.”

A “successful model” indeed, and one that we should all continue to emulate. And for that, Percy, we thank you.

Ian Roberts worked in Klemtu as production manager from 1997 to 2008. He is now communication director at Mowi’s farming operations in Scotland.

We Have a Lot to Thank Percy Starr For 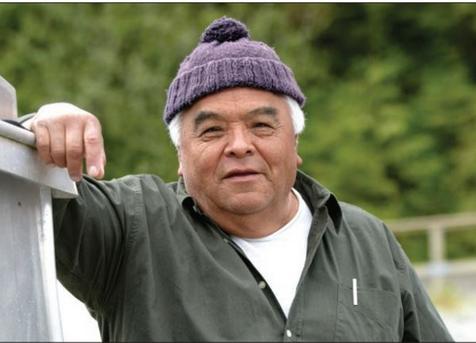