​Tim Rundle, General Manager, Creative Salmon, was honored on April 5th, 2017, with the Organic Champion of the Year award at the Canadian Organic Trade Association’s (COTA) awards night. Held in Vancouver this inaugural year, the event celebrated the contributions of organic agriculture and aquaculture producers across Canada – including west coast aquaculture representatives, Tim Rundle from Creative Salmon and Justin Herny from Northern Divine Aquafarm. Rundle, who is also the Chair of the Pacific Organic Seafood Association (POSA), was recognized for his involvement in the organic seafood community and his role in the development of the Canadian Organic Aquaculture Standard published in 2012. Rundle also sits on the board of the B.C. Salmon Farmers Association.

The Organic Champion award highlights the commitment and implementation of organic growing procedures, sustainable planning, and innovative product development in the agriculture and aquaculture industry. Under Rundle’s leadership, Creative Salmon has continually demonstrated their dedication to achieving and upholding a high standard of organic farming – an important step forward for the organic aquaculture industry.

“It is an honour to receive this award, and it signifies some recognition of the efforts being put towards Organic Aquaculture,” said Rundle. “This was the first year for the awards put on by COTA, and shows that aquaculture is starting to be recognized in the greater Organic community.”

Creative Salmon, based in Tofino, is North America’s first certified organic farmed salmon producer, achieving the certification in 2013. The company raises organic pacific Chinook and is committed to ensuring they are producing a healthy and organic food source. Low-density salmon pens, environmentally friendly net cleaning, and sourcing sustainable fish feed are just some of the ways the company meets the requirements of Canadian Organic Aquaculture Standard.

Rundle also attributes their success to the collaboration between the members of POSA, which includes fellow BCSFA members Taplow Feeds and Cargill Aqua-Nutrition Canada/EWOS Feeds. POSA members have endeavored to spread the message of organic aquaculture through tours and providing educational materials to distributors, restaurants, and consumers.

“The award was really about the work with the Pacific Organic Seafood Association in continuing to advance Organic Aquaculture Standards in Canada and it was acknowledgment of the efforts put into making this happen,” said Rundle.

The award is an initiative by COTA to encourage and support the production of high-quality organic products in Canada. The recognition of Creative Salmon and POSA underlines the substantial progress that the organic aquaculture industry has made, and will continue to make in the future. 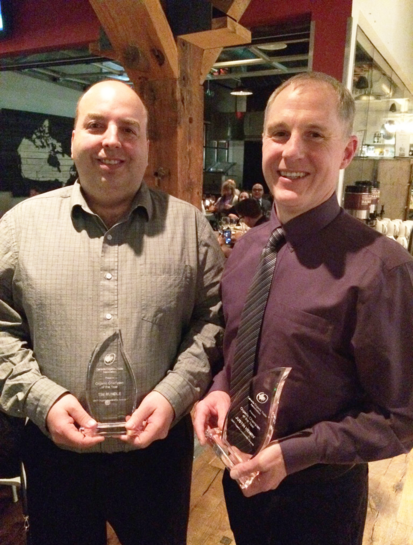