Has the War-on-Terror entered the streets of Western Nations in the manner of a Trojan horse? It certainly looked that way after one example on 22nd of May, 2013, when Lee Rigby was killed by two men, Michael Olumide Adebolajo and Michael Oluwatobi Adebowale, in a busy south London street. First he was run over by a car then he was hacked to death.

Rigby was a member of the British Army's Royal Regiment of Fusilliers. He was wearing a "Help For Heroes Charity" hoodie and killed with what looked like knives and a meat cleaver. The perpetrators came close to beheading him. An unconfirmed report by a civilian heard them shouting, "Allahu Akbar," which in English means, "god is great !" during the attack.

“I apologize that women had to see this today, but in our lands (?) women have to see the same thing. You people will never be safe. Remove your governments! They don’t care about you.” Those words of Adebolajo, a British citizen of Nigerian descent, were spoken with relative calm to civilians as the British soldier lay behind him on the road dying or already dead from his injuries.

Adebolajo addressed the camera of a bystander:  See 2:18 of attached video

Adebolajo was even speaking to a brave 48-year old mother who uttered her own thoughts, "You will not win," she stated. A short time later a female police officer opened fire on the two suspects, in particular when one of them made a direct charge toward her, while the other brandished a (as it was later learned) non-functional handgun.

Prime Minister of the day, David Cameron, was forced to suspend his European tour and return to London where he issued his own statement of the events that had occurred. “There are strong indications that it is a terrorist incident,” he said.

The first rule in war is to know what your enemy wants. As American punk rock band Greenday sang, "Do you know your enemy?" A soldier slaughtered in broad daylight should speak loudly to the conscious brain that what is wanted here is publicity.

The word terrorism has been magnified by the watchful eyes of the media, and the word 'terrorism' has been used in and possibly out of context to spur on consistent propaganda. No one can deny that a man wielding a meat cleaver dripping with blood is terrifying, having hacked to death his victim. But is it terrorism, an extension of the war on terrorism?

Michael Moore's Twitter account contained an immediate response to the Twitter-sphere's reaction to terrorism in London, which read, "I am outraged that we can't kill people in other countries without them trying to kill us!"

Well Moore might have waited to learn these two very English-speaking Christian-born and raised British citizens of Nigerian descent who later converted to Islam were at most conducting an incident of home-grown terrorism. They were both subsequently convicted of murder and sentenced to life imprisonment.

The most common description of a terrorist attack is an act of violence that targets civilians. Lee Rigby, 25, had served in the British Army for seven years. He was a soldier for a nation that had long been engaged at war.

Rigby may well have been off-duty but he was stationed at a barracks a stone's throw from where he was attacked and killed. For the previous decade the US, UK, and its allies had killed civilians and militants together, people who had been killed in their cars, homes and on the street.

It is argued Western Nations are not terrorists because they are targeting militants and not civilians. According to Wikipedia, a militant, "is usually used to describe a person engaged in aggressive verbal or physical combat." The US redefined the word to mean, "any military-aged male in a strike zone." They may redefine it some time in the future, at a point of convenience to salve the conscience of law-makers.

Lee Rigby's killer made it clear to the bystander holding the camera that he was aware he had targeted a British soldier, when he said, "This British soldier is an eye-for-an-eye, a tooth-for-a-tooth," (remarkably Old Testament but Christian Bible terminology). By our own created definition therefore this was not an act of terrorism but one of war.

War is never pretty, never a bed of roses (although enough of those get planted on graves), and whilst the Western world carved their chickens, roasts, hams, and turkeys on previous Sundays, soldiers and civilians lost their lives. It seemed most inconvenient that such violent portrayals of the outside world could be allowed to disturb British peoples bon repast that week in London.

The immediate and rising tension, possibly caused by mass media reports of terrorism, led to further violence from a right wing group in the UK called the English Defence League. More than 100 members were heard chanting "EDL ..EDL.." in south London whilst clashing with police. In Braintree, Woolich, Kent and Gillingham, bricks were thrown at mosques and anti-Muslim extremists hurled bottles at the police.

Meanwhile a counter-terrorism expert suggested attackers of the British Soldier may well have been inspired by the recently preceding Boston Marathon Bombing.

Do we need an expert to point out that the continued propaganda and accusations that every lunatic brandishing a knife or a bomb is an Islamic terrorist is having a dramatic and dangerously lasting effect on the collective psyches of Western Nations?

Has the anti-terrorism gambit launched post 9/11 gone too far? Or has the Islamic intention to conquer the world for Allah become the Trojan Horse that puts people of the Western World entirely on the defensive in their own home and native lands? It's all quite terrifying indeed. 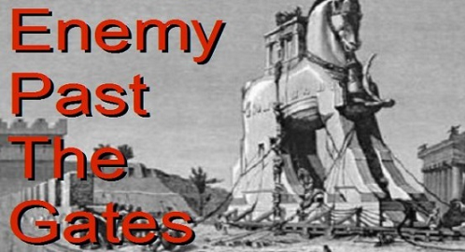 Has International Terrorism Introduced the Trojan Horse to Nations Involved in the War on Terror?