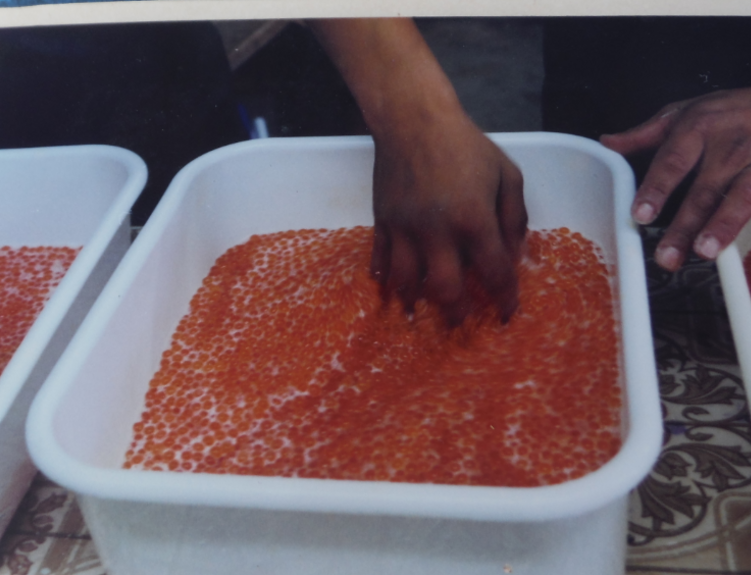 Lee George is the fisheries manager at the Sliammon Nation near Powell River, B.C., "The hatchery was opened in 1977," he says, "and we've produced 70 million fish in the years since."

The hatchery concentrates on four out of the five salmon species found in the Pacific. "This year, in October, we will release 80,000 chinook, 60,000 coho, 1.5 million chum, and 1 million pink salmon," says George.

This territory which provides a food fishery to the nation is joined by a sockeye salmon fishery that occurs on the other side of Texada Island at the north end of the Georgia Strait.

"We do a lot of canning of the redder coloured fish each year, and the chum are preserved by smoking. The quality of the fish returning to these rivers and streams is very good," says George, "Nothing is starving. We've had good quality fish in our returns."

Maintenance of the watershed is always a priority, "We've always done something every year to deal with loose debris removal. And we want more fish from our enhancement efforts. Our food fishery s regulated by 'abundance assessments' and everything is calculated."

November is the main month for Sliammon to do the assessments, and it's the busiest month for building public awareness of the importance of the fisheries. "We have 600 kids visit the hatchery every year. We give them the 'birds and the bees' look at the life-cycle of the fish, and they get a look at the fish returning to the stream beside our hatchery."

Sliammon culture and language is part of the school district curriculum, and the salmon fishery is obviously essential to Sliammon culture, so Elders and educators are at hand to host a barbeque and impart the history of Sliammon's dietary staple.

The hatchery employs four full-time staff and other employees are hired on a part-time basis to do egg culls, conduct tours, process stock assessments on the rivers, and tend to clam gardens on beaches. The Sliammon Nation has an active clam and oyster industry, both commercially and for communal food distribution.

The plan for increasing salmon enhancement efforts in the nation includes new equipment at the hatchery side of Highway 101. "We have a few things like new incubators. We also have new training programs in place," says George. The 2700 member Sliammon Nation continues to play an effective role in maintaining the sustainability of wild salmon on the B.C. coast.