Mar. 24, 2018 - There are a lot of exciting advances happening in aquaculture and fisheries science, attendees learned at last month’s Collaborations on the Coast seminar in Nanaimo.

The seminar brought together some of the best and brightest scientific minds in Canada to discuss the latest scientific research, and what it means for the future of both wild and farmed salmon on the BC coast. One of the most well-known fisheries researchers in Canada, Richard Beamish, spoke about the long-term trends that are affecting wild salmon from Russia all the way to California.

Climate change and fishing pressures have dramatically changed the stock levels and survival rates of wild salmon, he said, and the decline since catches hit an historic peak in the 1990s won’t be reversed easily. We’ve been researching this for nearly a century and know this already, he added.

Governments around the Pacific Ocean need to cooperate and collaborate on solutions that preserve all stocks, not just the ones in our own waters, he suggested.

An emerging issue for all fisheries and aquaculture is the alarming amount of microplastics in the water, said Sarah Dudas from Vancouver Island University.

Dudas presented her research and so far it isn’t looking good.

“They are everywhere, we are consuming them,” pointing out how researchers are finding them in seafood, tap water, table salt, even in beer and honey.

Scientists are paying extra attention to filter feeders such as clams and oysters, which are early warning indicators for how much microplastic is in the ocean. Dudas’ will continue her research, but one interesting point she made is that the intensity of microplastics in their samples is unrelated to any activity nearby, such as salmon farms.

A multi-year study that has been using acoustics to track fish behaviour is revealing some interesting results.

The research, presented by Shani Rousseau from Fisheries and Oceans Canada, uses data collected in the Okisollo Channel at and around salmon farms. One interesting result that’s a new discovery from last year is that at night, juvenile salmon hang out near the surface. Herring school in the water column below them, and the two groups don’t interact with each other.

Several years of tagging research has been completed by Kintama Research now, and what it shows us is that wild salmon don’t spend much time at all in the Discovery Islands when they are migrating out of freshwater.

In fact, said Erin Rechisky from Kintama, the biggest decline is the time they spend in the Strait of Georgia, growing and eating. When they travel through the Discovery Islands to the Queen Charlotte Strait, they do so very quickly – spending no more than 4 minutes swimming past any given farm – and have an 80% survival rate through the region.

Reprinted with permission of Cermaq Canada 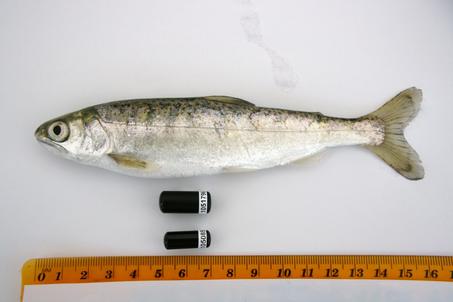