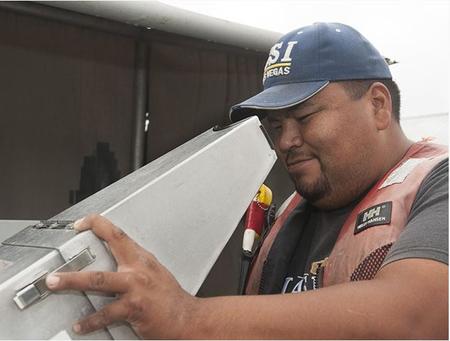 Nov. 21, 2016  - The ties between the aquaculture industry in British Columbia and the First Nations communities on whose traditional territories those operations are located haven’t always been strong. But over the past decade-and-a-half, many of those relationships have improved, and when they have, they have often brought advantages like consistent employment, royalties and improved quality of life to band members.

Chief John Smith of the Tslowitsis First Nation on Vancouver Island remembers a time between 2004 and 2011 when Grieg Seafood first entered into discussions with his nation about operating three farms in their territory.

“We had a miserable time initially because the first manager of regulatory affairs didn’t want us there, period,” he said. “He didn’t want us to have any authority or to have to answer to us, and we argued about who should hold the license to the farms on our traditional territory.”

Things changed when Marilyn Hutchinson became director of growth and sustainability for the company in 2011 and she began working on improving the relationship with Smith and the Tslowtsis people. “At that point we started to have conversations that made some sense,” Smith said.

If we’re looking for expansion or growth, that will only be done in collaboration with First Nations agreements or partnership.

“Reaching out was important so we can share in our success in the Tslowitsis territory, but not all First Nations want that,” Hutchinson said. “It’s critical that any indigenous group be talked to and engaged as part of operating in their territory, and we look for those relationships at Grieg. The Department of Fisheries & Oceans and the province of British Columbia consider whether we’ve engaged with the nation and whether we have their support when they look at our [site] applications.”

For Smith and his tribe members, being invited into the operation as a partner made the difference.

“As a result, today we have a mutually respectful relationship with Grieg where we’ve got each other’s backs,” he said. “We receive signing bonuses for new farms, rental for the site when there are fish in the water and a percentage reimbursement per kilo for the fish.” His tribe uses its compensation from the company towards student education and building a new community in Campbell River.

Through its guardian program, the Tslowtsis can cruise their territory by boat and monitor the fish populations. “If there’s a problem with the fish farm we can say and do something about it because now we’re on the inside,” he said. But there haven’t been any such problems and Smith is unconcerned about reports of farmed salmon contaminating their wild counterparts with sea lice. “Just now we’ve had the biggest run of chum that anyone alive today can remember,” he reflected.

Grieg Seafood renamed the three salmon farms Big Brother, Little Brother and Little Sister in the Tslowitsis language. “They’re not the farms’ actual names but it’s a token of respect, using some of our culture to remind people that this is our territory,” said Smith.

Today there are 20 partnership agreements between First Nations and salmon farming companies, up from 15 three years ago. “Each agreement is unique and different because each nation is unique, different and has different parameters,” said Jeremy Dunn, executive director of the BC Salmon Farmers’ Association. Some 78 percent of the annual harvest in the province is covered under those collective 20 agreements and Dunn said association members are developing additional agreements, particularly with nations who want to develop farming in their territories.

“Salmon aquaculture in B.C. is worth $1.14 billion to the economy and farm-raised salmon is the province’s No. 1 export by value,” he said. “Nations that become involved in aquaculture through partnerships are benefiting in a variety of ways – employment, social development, financial gain and as a catalyst for their economic development.”

The majority of those 20 relationships started with First Nations issuing eviction letters to the companies, he added. “Through conversations and shared understanding as neighbors, they’ve learned to work together and developed mutually beneficial partnerships over time. The First Nations communities that are involved would say they’re better off today than before they became involved.”

Salmon aquaculture has been an important source of income for James Walkus, a member of the Gwa’sala-‘Nakwaxda’xw Nation in Port Hardy and owner of James Walkus Fishing Company. Walkus processed 40,000 tons of fish last year for Marine Harvest Canada and said aquaculture keeps him busier and is a better source of income than commercial fishing most of the time.

“The Gwa’sala-‘Nakwaxda’xw Nation gets royalties from aquaculture, which helps the community, and we’ve had community members employed at Marine Harvest Canada from day one. So for those folks that want a steady job, their lives have improved as a result of aquaculture,” he said.

If there’s a problem with the fish farm we can say and do something about it because now we’re on the inside.

Marine Harvest Canada operates in the traditional territories of 25 First Nations and has good relationships with 15. “We strive to be a good neighbor, and if we’re looking for expansion or growth, that will only be done in collaboration with First Nations agreements or partnerships,” said Ian Roberts, director of public affairs. “It’s always easier when you have a positive relationship with the communities in which you operate.” 3/4

“We need aquaculture around,” said Walkus. “We hear oppositions about bringing in outside or foreign salmon to our country, but there are so many other things that are brought into our country. And the reports about contamination by Alexandra Morton don’t really hold water because aquaculture didn’t hinder this fall’s chum salmon run, the biggest wild chum run ever, or the 2010 sockeye run, which was the biggest since the 1930s. I don’t think aquaculture is hindering our wild stock at all.”

Others do not agree. Last spring more than 50 B.C. First Nations representatives held a strategy session on how salmon aquaculture should proceed while research on the possible effects of aquaculture on wild salmon is in progress. The First Nation Wild Salmon Alliance recommended restricting all salmon farm licenses to a year until evidence indicates farms don’t damage wild fish or their habitat – but a couple months later the federal government issued salmon farms in British Columbia (with the exception of those in the Discovery Islands) six-year licenses.

One First Nation that has found a solution to aquaculture is the Namgis on Vancouver Island, which created Kuterra, a land-based salmon farm precisely because they worried an ocean farm would create potential harm. However, calls to Kuterra were not returned 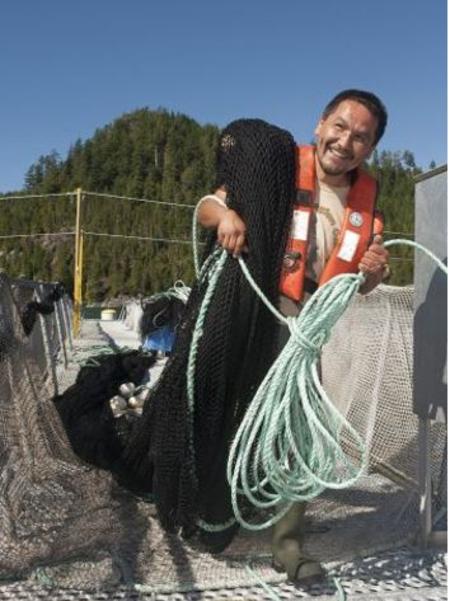