The more popular social media and android communications becomes the more the world seems to shrink. Internet connections enable us to communicate with anyone online and form new friendships. In fact the internet has opened up an alternative reality where now it is perfectly okay to speak to strangers, furthermore, the fact is through social media we are able to share our entire lives with them. But what happens when the stranger turns out not to have an ounce of humanity as is to often the case?

Recently we saw the conviction of Dellen Millard and Mark Smich for the first degree murder of Tim Bosma in Ontario and this was a crime that was especially arranged in email and cellphone conversations that might never have occurred in a previous time. Even more recently there was an arrest for the murder of Rachel Pernosky, allegedly committed by her step-brother, Matthew Joseph Pernosky charged in 2016.

Rachel Pernosky was a bubbly, friendly 18 year old with her whole life ahead of her. Her friends described her as having the ability to, "lighten up the room, everywhere she went. "On the 22nd March 2014 tearful family and friends attended a candlelight vigil in Mission B.C. in memory of the murdered teen. What makes the loss so much harder to bear is knowing her then-18 month old son Marco has been left without a mother.

On Saturday the 10th  of March 2013 Rachel was reported  missing. A 25-member strong RCMP police search for the missing teenager commenced some time later when her interaction online became absent. When the police entered her home they were instantly concerned due to the discovery that she had left her personal belongings including her purse money and perhaps more worryingly her cellphone.

On the day Rachel had last been seen she was on her phone tweeting a moment by moment account of things going on in the street, Rachel was an avid fan of social media including facebook. Religion, politics, friendship, love, humour, entertainment, hatred, insanity and murder, apparently social media has it all.

Rachel's neighbour Leila James saw her drinking and smoking outside her home on the Saturday afternoon. More notably she recalled that Rachel had been talking to a stranger in a baseball cap. Was this Rachel's killer ? Leila did not detect any cause for alarm at the time. "They were just having a friendly conversation together." She told the Vancouver Sun.

Sgt. Jennifer Pound, speaking on behalf of the RCMP homicide investigation team, reported that, "there had been no forced entry into Rachels home." This appeared to have been a targeted attack and so it is not believed that other women in the area are in danger. It is estimated that 175 million a day sign into facebook and 55 million tweets are written daily on twitter. That is just two popular social media websites there are many many others. I think it would be reasonable to presume someone, somewhere may very well be in danger.

On a Tuesday evening 44 km from Rachel's home, a passerby made a terrible discovery and called the police. Rachel's body had been left down a steep embankment and search and rescue had to be employed to retrieve her discarded corpse. Meanwhile her son Marco none the wiser remained in the custody of his father. Sgt. Jennifer Pound emphasized, "The father is not considered to be a suspect."

The discovery of Rachel's body came as a surprise even to the police as they had not suspected homicide as a reason or her dissapearence. Rachel Allard said of her friend, "She was like a big sister to me and kept her head up in any situation"

Investigators to scoured her many facebook and twitter messages in search of the killer. Friends and family had to grieve the loss of such a beautiful young lady who had a whole life ahead of her. During the candlelight vigil they were reminded that Rachel had left the most beautiful gift to the world behind in her son Marco, who looks very much like his green eyed petite mother. 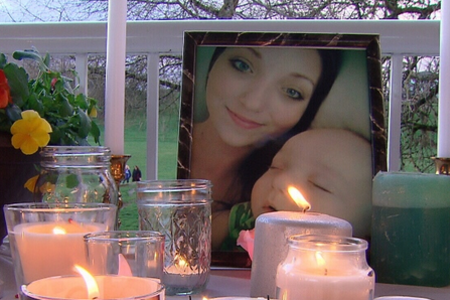