She works in the eye of the storm of the homeless crisis in the City of Nanaimo. She is employed in one of the tiny gas and convenience stores open 24 hours in the south end of the city. It's in the middle of 'the hood' and the action never stops.

Did you know a lot of homeless people stay awake through the night? Not all, of course. Some burrow into piles of blankets inside tents and load their shopping carts at the crack of dawn shaking off the frost to clatter down the street to the centre of the hood.

One couple is trying to escape the clutches of winter in a unique way, says the employee of the store. "They spend their entire welfare cheque on lottery tickets," and she's seen them do it a few times at the store, or they tell her they're going down to the casino to try their luck.

The reason is the welfare money isn't half enough to obtain a housing solution in the city (or anywhere else on Vancouver Island), they tell her, so the strategy they employ is focused on striking it rich enough to make the housing grade in one fell swoop. Now this sounds pretty insensible, but interestingly this couple are not using drugs or alcohol. They may not even be gaming addicts. They are simply using the social safety net in the most expedient way they can fashion to get themselves out of a housing pickle.

As winter's bite shows signs of weakness and the prospect of balmy spring mornings beckons, they have had no extraordinary luck at lotto, but it is hard not to admire their tenacity as a couple, as a team, as survivors with a sketchy plan for a better future.

Other characters are less palatable to the taste. Some characters drop dead in the immediate vicinity of the store's entrance, the call to fentanyl being once and for all once or twice a month.

The store is a gathering place for the 24 hours a day it stands with lights a'shining', gas a'pumping, coffee a'brewing, coke a'bubblin', cigarettes a smokin'. Gangs occasionally use the store parking lot as a distribution centre for the illegal drug trade fueling the economy of the south end. Pimps put the sex trade workers on the market in the surrounding streets, bring them in all bruised and battered for a pick-me-up, an energy drink, then off for another smash in the teeth.

Gang members gather in circles just round the corner from the entrance at the strangest hours. The employee tried elevator music a couple of nights to no avail, but it almost killed her.

One night this winter the circle had grown to five nattering pimps and drug dealers just outside the store entrance, so she picked up the store's baseline security system, a baseball bat, and stepped out with the heavy aluminium appliance to, "adjust the lottery sign by the gas pumps, so I made a big show of dragging the bat, and I kinda hollered, 'Okay, Ladies!' and swung the bat over my head to tap the cardboard sign, pretending to straighten it, 'This TEA PARTY is OVER. Wrap it up and move along!'"

There was grumbling and a pair of the street people objected to being called 'ladies,' but a ringleader made like a cowboy and whistled sharply to break up the coffee klatch and send everyone on their way to their mission, their purpose, urchins on guard for thee, truly a heartwarming outcome this night.

The authorities may be on some kind of mission of their own to shut down the day and night nexus of community activity.  The 7-11 across the street shuttered about a year ago, the pilferage had turned into a hemorrhage of losses, and staff turnover had become impossible to manage. A dozen jobs disappeared overnight in a community where the pickings are slim for opportunities.

You see, there is a quasi-governmental authority called the 'tobacco police' and they come around to 'test' the store employees on sales of tobacco or vaping products to minors.

Failure to discern the tricks employed by these tobacco police is very costly to any  employee who is fired on the spot. Then the store is put to review and the threat of license removal of age-restricted products looms. Such licensing peril would be death to the operation and it shakes management to the core. The job is, you can imagine, tough enough.

Good and reliable and honest employees who have years of experience retailing tobacco and lottery tickets have been cut down in their jobs, banned from selling these items anywhere in B.C.. Job creation versus job elimination,  it may be a seesaw battle in South Nanaimo's 'hood.'

It is as if the only available commerce in the core of South Nanaimo will be Russian Roulette with a drug transaction.

Yes, the scene is borderline mayhem, the people are often unhinged, the situation calls forth a great deal of self-regulation by participating denizens, and mental health is often perched on a razor's edge, with outbursts and explosions always threatening. Banning people from the premises is like a game of cat and mouse. They come in wearing head coverings, change their voice, try to appear unassuming or even invisible.

Others persist with begging and others are always stealing candy bars or muffins or Nanaimo bars. When they get barred, the store employees face litany-laced death threats, bottles and bags and cartons get thrown. This ad hoc social work is a messy business.

Like the little Dutch boy with his finger in the dike, the store employees are stuck with the purpose of making the world a slightly more forgiving place. It is an uphill battle on the corner looking down on the harbour of a great little city in the centre of Vancouver Island.

Ed. Note: As of this reading Mar 16, 2020, the private company policies at this store have not changed one iota in respect for coronavirus concerns.

On the Matter of Convenience 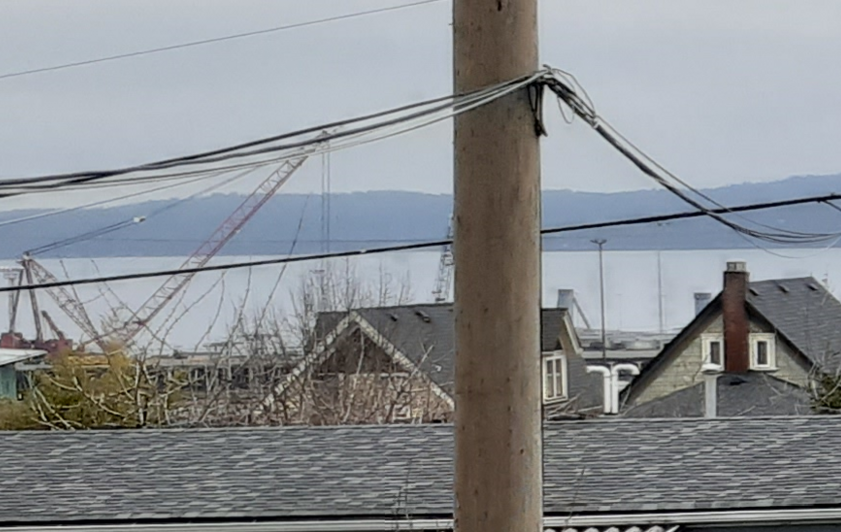