When Desire Munyaneza was sent to jail in October 2009, it was because he was found guilty of genocide, war crimes, and crimes against humanity in connection with the 1994 Rwandan genocide. At one time, the question was aired: what prompted the Rwandan genocide to erupt in in 1994, one of the most immediate genocides in history?

The questions rose especially after the courts heard the testimony in trials about this genocide of recent history. The explanation was that some kind of political vacuum was left by departing colonial Belgians. But what explains the incessant radio broadcasts calling day and night for Hutus to take every corpuscle out of the Tutsis?  “Kill Tutsi ‘cockroaches!’” the radio cried, endlessly, ceaselessly. This broadcasting dehumanization of Tutsis facillitated the inexplicable slaughter of nearly a million people in less than 80 days,

Historians said it was a complete reversal of fortune foisted on the formerly privileged Tutsi. It was bloody and relentless tit-for-tat genocide and a form of "reality" of revenge. We were informed Tutsis were separate from Hutus by the accident of a mocking privilege they had found in their own skin pigmentation.

None of the darker-skinned garbage men, Joe-lunch-buckets, unemployed sons and daughters of previous massacres, were going to deny a century of oppression had happened under Belgian (and previous to that German) tutelage. It was written on everybody’s face rich as Belgian chocolate. The Tutsis, they said, had been European-favoured who were oddly unprepared, or unable, to continue governance over this facile social organization that had been left to them by colonialism.

Long since Joseph Conrad wrote Heart of Darkness (at the turn in to the 20th century), it must have become second nature for Tutsis to enjoy the privilege of committing atrocities on behalf of Europeans. It was an apartheid of a different sort, Tutsis grew Belgian-sized bellies living off the fat of the land, then suddenly became targets in a 80-day massacre of 800,000 of these lighter-skin-coloured Rwandans.

An event of dehumanization something like this occurred in Cambodia after French Colonials were forced out of South East Asia, and American policy when U.S. policy failed, in which Khmer Rouge rose to commit atrocities on the ones educated and presumably favoured by the French. A genocide trial was getting underway in Cambodia in 2014. What happened in 1975 if you wore glasses, carried a book, or owned a necktie, the KR marched you out of cities like Phenom Phen at gun point and killed you in front of a mass grave.

In Rwanda, the lighter-skin-coloured, educated, bureaucratic, and former ruling class Tutsis became victims under the constant radio cacophony of dehumanization demanding door-to-door hunting down of these less than human members of the society that had been the ruling class. From the widely desseminated images, the hunt was in suburbia for people who enjoyed the advantages conferred upon an elite, a people who were conveniently easy to spot by the colour of their skin.

History informs that when Belgians departed with the authority, the remaining 'privileged' were standing around without machetes. These are the ones who fell, and only occasionally to pistol shots to the head. In film and photos showing the event (there is a surprising amount of it)  bodies are lying outside entrances to suburban-style housing, doorways and driveways. The genocide was committed in the prosperous neighbourhoods of Kigali, not in shantytowns.

Meanwhile Hutus told other Hutus to kill or be one of the ones they kill, and this had become another one of the distinctions in the selection of victims. Besides broadcasting the sudden promotion of cleaning up the country of a cockroach infestation, some or all of the Hutu perpetrators admit they were tempted by offers of land ownership, banana trees, and so forth, post-genocide.

Such promises may well be unfulfilled, according to reports, but were made clear enough to become incentive to kill those who controlled the business of land, at least how and where to file the deeds. A few surviving Tutsis put pen to ink. A few Hutus are pleading in courts around the world. This much is sure: the Rwanda School of Radio Broadcasting must be one of the most terrifying institutions on earth.

Publishing houses have made the rounds, books are filled with stories hard to stomach, and indeed there are important events to expose. Meanwhile, Rwanda saw people stepping out of the woods and alleys and up from the creekbeds to make reports, and one such report landed on CBC television at the end of May 2007, in which appeared a woman named Eugenia was nicknamed, ‘The woman with a crooked walk.’ Hers story was of permanently disabling injuries and survival in the midst of genocide. She lives with a legacy of scars from machete wounds.

Therein lies the crux, on some level, crimes against humanity are misdemeanours in Rwanda.

Tutsis must have been entirely acclimatized to the reign of death in Rwanda and possibly bore a century of guilt for atrocities on Hutus.

The Canadian court paid a visit to Rwanda to take a man's testimony on death row, a mystical place in Rwanda. No reports have been made of executions, but how surprising would it be if they did or did not occur? Usually the story rendered from Rwanda is astonishing for the amount of forgiveness on display. Forgiveness may not always there, but that it is there at all, this is astonishing.

Such a level of acceptance is surreal to most sensibilities, and, as the report on Eugenia showed, people pick up their lives and often go forward in lock-step with perpetrators of atrocities. Eugenia was a woman who by then had spent 13 years after the 800,000 killings undergoing little healing and no forgetting. The reporter noted Rwanda has many people making peace with the conflict, but Eugenia spent days mainly in recollection of the massacre of her children, by machete, recalling how her children called to the Hutus that they would, “stop being Tutsis.”

In Eugenia's case it was a life sentence for the perpetrator, however, killers after sentencing have since been freed and usually return home. This level of incivility in Rwanda, nevertheless, called upon the prevailing authority to establish an organization to deliver redress in society. Once a week, the “Gacaca reconciliation program,” takes over the country and citizens fall into gatherings to tell stories and give descriptions of the suffering.

The CBC reporter explained how Eugenia had been a frightened survivor and fear would continue because she struggled to deal with killer Eric Kasamarandi living nearby. Kasamarandi's explanation, after all the apologies for callousing hacking her children to death on her lap, “We were driven to kill by invisible enemies that invaded our souls.”

In Canada, we heard testimony in the trial of Desire Munyanesa in 2007. Returning to proceedings against Munyaneza, a Quebec Superior Court opened the first-ever War Crimes trial in Canada on Mar. 31, 2007. Identities of witnesses were concealed from Canadian public and the world because people in Rwanda (surprise!) always live with the threat of unexpected death.

Witnesses in the Canadian court were identified by alphanumeric designation to protect them on return to Rwanda and allow them to share horrifying testimony that is practically too much for civilized ears. Many testimonies were about things never heard in Canadian courts.

Witness C15 said she and others took refuge at their local government office, "hoping for a quicker death by bullets, rather than being hacked to death by machetes."

Munyaneza arrived in Canada from Africa in 1997. Munyaneza had been seeking refugee status that he never got and RCMP began investigating him in 1999, after he was spotted and reported in Toronto. The RCMP conducted a five-year investigation and decided to prosecute based on allegations that Munyaneza was a member of the Interahamwe militia. This was a leading militia operating in the Rwanda genocide.

He was eventually arrested in Etobicoke, Ontario, and it was October 19, 2005, that the Royal Canadian Mounted Police announced Munyaneza was detained under the Crimes Against Humanity and War Crimes Act with charges for two counts of genocide, two counts of crimes against humanity and three counts of war crimes including rape, murder, and pillaging. Munyaneza was the first to be arrested under that law, passed to give formal recognition to Canada's obligations to the International Criminal Court.

Munyaneza committed the acts near Butare, Rwanda, in 1994. Munyaneza's trial held in Montreal began in March 2007 with testimony of a woman, identified as witness C-15, stated that she had pretended to be dead for three days and smeared her sister's blood on her body in order to hide from Interahamwe gangs.

On April 10, a witness known as C-17 testified Munyaneza had raped her four times, and she had witnessed him personally raping and killing others. On April 11, Munyaneza was severely beaten in his cell at the Rivières-des-Prairies prison by a 17-year-old who had heard about the details of Munyaneza's trial in the media.

The trial resumed in Sep. 2007 and saw over 60 people testify in court, most with hidden identities. Witnesses repeatedly put Munyaneza at the head of a gang that raped and murdered Rwandan Tutsis. The defence and Crown filed thousands of pages in written final arguments in addition to 50,000 pages of court transcripts and other documents.

On May 22, 2009, Munyaneza was convicted on seven counts related to genocide, war crimes and crimes against humanity. The offences fell under Canada's Crimes Against Humanity and War Crimes Act, a law that allows residents to be tried for crimes committed abroad.

On October 29, 2009, Munyaneza was sentenced to life in prison with no chance of parole for 25 years, the longest sentence possible under Canadian law. It was stated by the judge that Munyaneza's criminal activities were the, "worst in existence."

Justice Andre, Quebec Superior Court, said the sentence was severe. Munyaneza's lawyer thought he should be imprisoned for twenty years. Emmanuel Muhawenimena, who said he lost 70 family members in the genocide, said, "So many Rwandans in Montreal, across Canada, all over the world, they are happy today."

Munyaneza is punished for the role in the calamitous 80-day killing of 800,000 people in their houses, churches, government buildings, and the streets of Kigali, an event that occurred when he was 27 years old, a relentless bloodbath. Munyaneza was 40 years old  when he faced the court in Canada.

The stratification of Rwandan society was manufactured out of a perilous system that included a group of land owners and cattle owners under the title of Tutsis and those of less abundance to be Hutus. Belgian and German colonials arranged the rules to make light-skin-coloured people Tutsis who worked close at hand with Europeans to exploit darker skinned Hutus on the farms and plantations and service jobs.

Had Desire Munyanesa been born a Tutsi and several decades earlier the crimes he committed would hardly merit a history lesson never mind a trial. Munyaneza lost an appeal to the Canadian Supreme Court in 2014. Genocide trials are what the CIA, chief apologist for the Military Industrial Complex, calls BLOWBACK. Notice on Rwanda -- a critical calculation made by somebody in the machete procurement office: When using machetes it takes less than 100 days to kill 800,000 people.

'Inside Roméo Dallaire’s brutally revealing new memoir' https://t.co/gWpryv47KP This is a very good read about #PTSD.

A Primer on Modern Day Genocide: the Rwandan Genocide 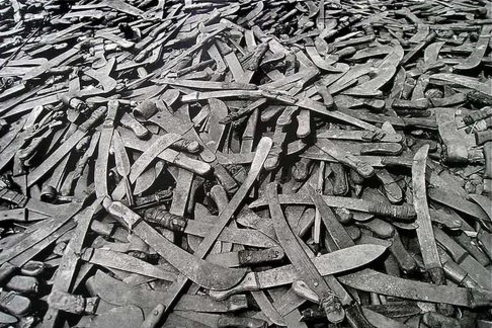 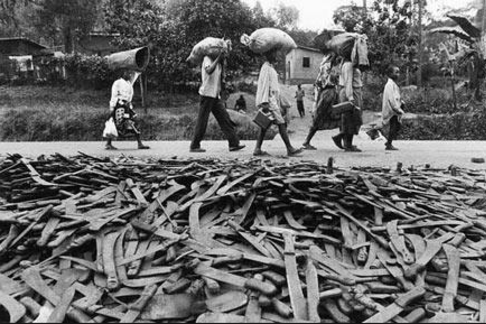