My last blog post discussed fake seafood news. That blog post was timely, given an old online article has found new life on the internet titled “Farmed Salmon – One of the Most Toxic Foods in the World.”

To be blunt, this is a poorly crafted piece of nonsense, and so far removed from fact that even correcting it seems to provide unworthy credibility. However, I feel we owe a response to the people who aren’t salmon farmers, who may not know our business intimately enough to respond themselves, and simply love our product but are understandably enraged when they read articles like this.

Let’s start here: the article doesn’t just attack farm-raised salmon. It actually states that “farm raised fish of ALL species can spell disaster for your health.” Of course, the article provides zero evidence to back up this statement. That’s because it isn’t true. Not even remotely true.

Now, before I succinctly correct the seven “Did you knows” listed in this article, let me explain how these type of articles are typically born. It is no coincidence that the article includes a paid sponsorship hyperlink to a company called Vital Choice “Wild” Alaskan Seafood. For decades, Vital Choice owner Randy Hartnell has largely promoted his fish and supplement products by attacking what he feels is competition – farm-raised salmon. He isn’t shy about it, and he financially supports people who also attack farm-raised salmon for him: including activist Alexandra Morton. Alexandra Morton is listed as one of only two sources used for this article. You’ll see Randy’s name come up again in our response below.

So, let’s cut to the chase. Here’s our response to the seven claims made in the article:

1. Fed toxins? Not even close. Farm-raised salmon are fed a healthy diet that provides the nutritional needs of the fish. We’ve listed the ingredients for years – this ain’t no secret recipe guarded by a guy named Colonel Sanders. Our latest diet composition can be found on page 6 in our Reference Document posted here.

2.  Seven times the levels of PCB’s as wild salmon? Nope. While this may have been the case 20 years ago, when farm-salmon diets were higher in fish meal and oil, this is not the case today. But regardless, all species of salmon – farmed and wild – have only ever contained trace levels of PCBs.  In fact, all foods contain trace levels, including vegetables. The latest data consistently shows PCBs levels in farm-raised Atlantic salmon is less than 1% of the maximum limit set by North American food safety regulators, virtually identical to wild Atlantic salmon, and similar to species of Pacific salmon such as Chinook and Sockeye.

3. 30 times the level of sea lice (compared to wild salmon)? This is not accurate, but this little sea crustacean is no concern to human health anyways. Many species of wild fish naturally host sea lice – one study (Beamish et al, 2009) confirmed that several species of wild adult salmon naturally host over 40 sea lice. Despite this natural occurrence, salmon farms in British Columbia are highly regulated to ensure farmed fish host no more than 3 sea lice at specific times in the year.

4. Fed toxic chemicals to give them color? No way. To best explain the process by which a farm-raised salmon gets its pink colour, let’s quote a recent statement by Cook’s Illustrated, “The pinkish color of the flesh is created by compounds in the feed. A similar process occurs in wild salmon, which get their pink color from eating shrimp and other sea creatures rich in carotenoids.” The carotenoid that is included in a salmon diet is approved for use, may be natural or synthetic, and quite ironically is proudly sold on Randy Hartnell’s Vital Choice Seafood website.

5. Are given antibiotics at higher levels than any other livestock? No way. While most other livestock producers do not publicly disclose antibiotic usage, salmon farmers do. It’s minimal, and sometimes nil. Here’s a link to the Global Salmon Initiative website that provides lots of data from the major salmon farming companies around the world, including antibiotic use.

6. Have less Omega 3? Absolutely untrue. When comparing all salmon, Atlantic salmon (wild and farmed) are the richest source of Omega 3. Heck, even Randy Hartnell has to admit on his company’s website that “In fact, farmed salmon may contain somewhat higher levels of omega-3s.”

7. Are susceptible to more disease? Like other animals raised in captivity, farm-raised salmon are provided an effective vaccine to protect them from naturally occurring diseases. They are also cared for under the supervision of a veterinarian. After two years in the ocean BC farm-raised salmon typically see better than 90% survival, which clearly indicates they are healthy.

When speaking about fake seafood news, this one was a real doozy. And while we don’t expect the facts will catch up to the original lie, we do hope that the people that matter – the millions who want to eat more healthy and safe seafoods – will be given access to the facts.

You can help by sharing this response. 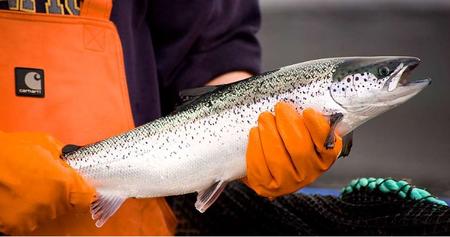