Images supplied by Grieg Seafood BC 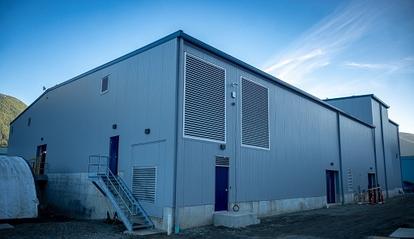 . . . as it looks to increase the time its salmon spend on land 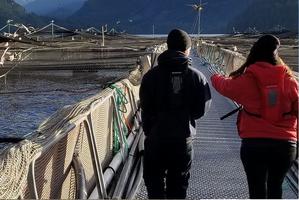 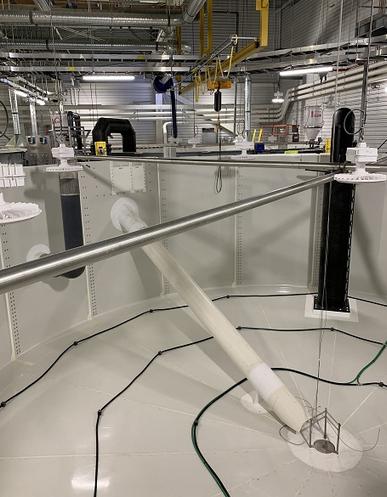 Pictured is one of the six tanks in the new facility prior to being watered up. Each tank is 3.5metres deep, and 11 metres across, with a volume 326 cubic metres, or 326,000 litres of water.

GOLD RIVER, BC – Feb. 28, 2022 - The expansion of Grieg Seafood BC Ltd.’s (Grieg’s) Gold River Hatchery project, known as the RAS 34 Project, is nearing completion, and in mid-February the project team celebrated reaching the first of three milestones signaling the end of the project is near.

"We are excited to share that the tanks within the new hatchery facility are being filled with water. This is a huge achievement and allows the focus to shift from overall construction to what we do best at Grieg, which is raise beautiful, healthy salmon for Canadians, and provide a growing global demand for nutritious, sustainable, protein. In total, the project represents an investment of over $25 million and the creation of almost 60 fulltime site positions at the peak of construction.

"The new facility will effectively double our smolt capacity at our hatchery and allow us to start to explore keeping our fish in the hatchery for longer which will reduce the time required in the ocean, known as post-smolt farming. This is part of our overall company goal of transitioning more of our production onto land," says Rocky Boschman, Managing Director for Grieg Seafood BC.

"With our constantly evolving research and science into new and better fish culture processes, we now know that there are benefits to both the wild and farmed populations if we allow our fish to grow larger than the traditional 100-gram size at which we have been generally transferring smolts to our ocean farms. These benefits include the reduced time spent in the ocean, which minimizes the overall period during which wild and farmed salmon can interact," he says.

"It also has direct benefits for the farmed salmon, as by allowing the fish to grow larger on land and transferring them at a larger size to our ocean farms, the fish are better able to handle the transition from fresh to salt water, and are overall healthier as they are better able to resist the natural bacteria and pathogens found in the ocean environment."

For the team at the Gold River Hatchery, the new RAS 34 facility will be an exciting addition to the current facility. Adding water to the six tanks housed within the RAS 34 building means that they can now begin to work with the system to create the necessary healthy bacteria and water conditions required to support the growth up of to four million smolts.

"With a new system, you have to ensure you create the right water conditions,"  says Grieg Freshwater Director Scott Peterson. "If you have an aquarium at home, you know that before you can add your fish, you must let the tank cycle. Well, we will be doing that over the coming six to eight weeks, but instead of the typical 38 litre, or 10-gallon fish tank you would have at home, we are doing this for our system which between the six tanks, has the capacity to hold just under two million litres of water. In order to support all of this, we have two biofilters which each have the capacity to treat and filter 200,000 litres of water per minute," says Peterson.

"The new facility, which we call RAS 34 at the moment, will really become the hub of our hatchery operations once completed later this year. The building itself will be able to support the growth and development of up to four million smolts, but we will also be locating all of the sorting, grading, and vaccination equipment in various rooms within the new facility."

Construction of the facility is approaching completion now that water has been added to the system tanks and biofilters, but the project still has two major milestones remaining. The overall management system for the facility is scheduled for completion in March, followed by the addition of the first fish in April.

"Later this spring we will be hosting several events to mark the completion of the new facility and celebrate with local communities and our employees. We will be hosting special dignitary tours initially, followed by an employee event and a larger community celebration which will include tours of the facility. We will be sharing details of those events in April once we are through these next two milestones," added Boschman.

"As a company, we would be interested in continuing to move forward with projects like these which help to improve our overall operation, create jobs and inject millions into the local economy. We are hoping that by working with local Nations, the provincial government, and the Department of Fisheries and Oceans we will be able to help define what a transition for the industry will look like, and how we can look to invest and grow in that direction once we have industry stability, which will be required for any type of further investment in our operations."

Project Quick Facts:
• Total project cost: $24.75 million.
• Project related job creation: At the peak of construction, 57 full-time jobs were created by the project.
• The majority of project contractors, project workers, and materials sourced were sourced locally on Vancouver Island.
• Construction timeline: approximately three years, 2019 – 2022 (this includes a three-month project shut down during Covid-19 pandemic).
• Capacity of the new facility: up to 400 metric tonnes of fish.
• Capacity of original facility: 500 metric tonnes.
• Combined capacity of expanded facility 900 metric tonnes.
• Largest size smolt which can be grown in the new facility: up to one kilogram

Grieg Seafood BC Ltd. is one of the largest salmon farming companies in BC, and is targeting 22,000 metric tonnes of harvest in 2022. It is headquartered in Campbell River, BC and has approximately 180 fulltime employees, mainly located in the rural coastal communities in which it operates. Grieg holds 22 farm licenses located on both the east and west coast of Vancouver Island, and operates a hatchery in Gold River, BC. It contracts its processing to a locally owned and operated processing facility north of Campbell River.