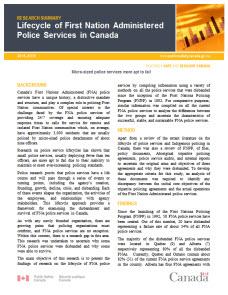 Canada's First Nations Administered (FNA) police services have a unique history, a distinctive mandate and structure, and play a complex role in policing First Nation communities. Of special interest is the challenge faced by the FNA police services of providing 24/7 coverage and ensuring adequate response times to calls for service for remote and isolated First Nation communities which, on average, have approximately 3,000 residents that are usually policed by micro-sized police detachments of about nine officers.

Research on police service lifecycles has shown that small police services, usually deploying fewer than ten officers, are more apt to fail due to their inability to maintain or meet ever-increasing policing standards.

Police research posits that police services have a life course and will pass through a series of events or turning points, including the agency's creation, founding, growth, decline, crisis, and disbanding. Each of these events shapes the organization, the activities of the employees, and relationships with agency stakeholders. This lifecycle approach provides a framework for examining the disbandment and survival of FNA police services in Canada.

Method
Apart from a review of the extant literature on the lifecycle of police services and Indigenous policing in Canada, there was also a review of FNPP, of files, policy documents, Aboriginal tripartite policing agreements, police service audits, and internal reports to ascertain the original aims and objectives of these agreements and why they were disbanded. To develop the appropriate criteria for this study, an analysis of these documents was required to identify any discrepancy between the initial core objectives of the tripartite policing agreements and the actual operations of the First Nation Administered police services.

Findings
Since the launching of the First Nations Policing Program (FNPP) in 1992, 58 FNA police services have been created. Out of this number, 20 have disbanded representing a failure rate of about 34% of all FNA police services.

Ultimately, it was discovered that the 20 disbanded FNA police services suffered from both a “liability of newness” and their diminutive size. Few of the disbanded agencies were operational for more than a decade and the average disbanded department employed five or less officers and provided services to communities of approximately 1,700 residents. Their average budget was $0.7 million. In contrast, the 38 surviving FNA police services, on average, police approximately 4,500 residents by a detachment of about 22 officers with a policing budget of about $4.0 million.

This finding confirms previous policing research, which posits that new and very small police services, usually deploying fewer than ten officers, are more apt to fail due to their inability to maintain or meet ever-increasing policing standards or deal with crises.

FNPP policing agreements are terminated for cause. Usually, it involves serious violations of agreement terms and conditions, as well as major operational and ethical breeches, or inability to meet increasing provincial policing standards. Both levels of government are involved in the decision to disband an FNA police service.

A major factor that previous research on the lifecycle of police services did not take into account is the fact that young organizations also tend to have younger and inexperienced police officers, non-commissioned officers, senior management, and police governance authorities. Only four years after the inception of the FNPP, a landmark survey of Aboriginal police officers in 1996 discovered that while police personnel in the First Nations communities were shown to be quite comparable to their counterparts elsewhere in Canada in terms of basic socio-demographic characteristics (e.g., gender, marital status), education, training, philosophy of policing, evaluation of their policing organization, assessment of police work, time spent on the various police functions, job satisfaction and major areas of reported stress. However, they differed with respect to age and experience in policing (being less in both), having to confront some special circumstances such as ‘political pressures,' being with new organizations having start-up problems, and dealing with very high violent crime rates and workloads. The combination of all these factors may have been an overwhelming experience for many of these young and inexperienced police officers.

Public Safety Canada has undertaken research to develop an inventory of best practices in rural policing that may be effective and efficient in lowering crime and victimization in remote and isolated Aboriginal communities.