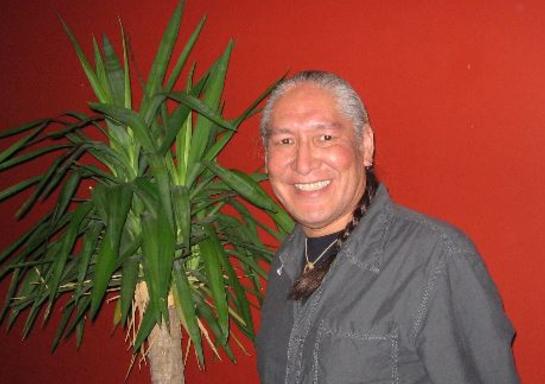 David Segerts is a man who lives for positive change in Canadian society. Sitting one day with Segerts in his tastefully decorated apartment I felt surrounded by an orderly nature given to his lifestyle and was treated to his impeccable manners. I was also given a taste of his lifetime of memories before he talked about the really important issues he works on.

Segerts was born in 1960,  at the time Uranium City, Saskatchewan, was a city of 5,000 souls, and he grew up to see the mining property turn into a ghost town. Uranium City was shutdown in 1982 but by that time he was ready to move on.

"I am a Dene/Cree but I generally say I am Dene because I look almost exactly like my Dene father." He shows a photograph that proves he is the spitting image of his dad. "I dropped out of school when I was in grade 8 and went back for adult upgrading by the age of 25 at Alberta Vocational Centre in Calgary. AVC was a good learning experience although the facility lacked a First Nation student organization so I helped put one together. We held dances, fundraisers, and hosted a room that the school donated, which became a gathering place for all nations and a useful foot in the door for First Nation students."

A short time later Segerts began to study something very important in First Nation life in Canada, the tactics of oppression known as lateral violence that are especially prevalent in systemic racism. It is this lateral violence that explains the extraordinary incarceration rates and recidivism in crime for the First Nation people of Canada. As high as 50 percent of the prisoners in Canada either male or female are First Nation or Aboriginal people. For these kinds of disparities to exist in a segment of society that is less than 5 percent of the total population, the problems have to run very deep indeed.

"Lateral violence goes on in every First Nation organization and starts with arguments like, 'My family is better than theirs,'" he says. "It is important within the system of racism to get us fighting amongst each other. We are actually born into it, however, because the system is designed that way. Public awareness is the only way to address it," says Segerts.

"The methods of lateral violence include, backstabbing, gossip, infighting, shaming, humiliating, damaging comments, belittling, and sometimes violent behaviour." Other terms for what is happening to First Nations in Canada include auto-genocide and horizontal violence, he said. These terms are applied mostly to the members of oppressed groups in society, and he explained, "I didn't really understand lateral violence until I was about 30 years of age. I rarely discussed it until I did the research first. Lateral violence is designed to prevent efforts to heal the effects of oppression."

Lateral violence teaches people to disrespect and deny the rights of an oppressed group, to destroy values and beliefs. Practitioners will engage in infighting, faulting finding, and scapegoating, raising the stakes of competition via jealousy and envy. The attacks are made upon those who already possess low self esteem and further attacks lower a person's self worth.

Ultimately the goal is to make the victim take blame for the continuous putdowns, "This is the nature of oppression," says Segerts. "It is a denial of their self and humanity. They think they have become objects unworthy of respect. They fail from the inability to recognize themselves as human beings. They become convinced that the oppressor owns them, and often the oppressor does own them through financial dependencies upon welfare and personal dependencies upon drugs or alcohol."

He says, “When my son was 11 years old I brought him to Calgary to live with me, and after a few short weeks he told me, ‘Dad, I didn’t realize that Indians didn’t drink. I didn’t realize the Indian men work.’” It was another stunning learning experience about lateral violence for Segerts the father who has never spent time stuck in welfare programs but knows on reserves and in some urban communities it can become a long-running generational trap.

“People who feel dependent suffer a lack of personal power. When they lose power they will see their cultural identity eliminated and be unable to stop it,” he says. Many times the First Nations in Canada have been known to hide their own beliefs or adopt the beliefs of an oppressing society. “They were dislocated from the land and suffered breakdown of family structure during the Residential School years. Indigenous people were removed from families at age four in some cases, only to be afflicted with physical, mental, sexual, and social abuses.”

His own mother had a safety pin jammed through her tongue by nuns at one such school, then was made to sit facing a corner in a classroom for speaking her Cree language. “There were many children killed by torture,” he asserts, “and other families were disrupted by one child being raised in a Catholic school and another being raised in a United Church run school. In fact the Residential School system was a highly specialized form of lateral violence.”

The lateral violence design for First Nations people results in a distrust of First Nation leaders by their own people. “It results in a distrust of those who might emerge to help," he says. "Rising stars are severely restricted or punished. Leaders who make any difference are fired and persecuted. Incompetent leaders are recruited and promoted by the oppressors. Dividing and conquering is the main process used by the oppressors.”

Segerts needs to write a book with a biographical story line if he hasn't already. He was trained as a technical engineer at BCIT and NAIT, then, while living in Vancouver, he entered the film industry, first as an actor, then as a producer and director. When we last spoke he was running a youth-at-risk employment initiative that operates across Canada for First Nations. Remember the name David Segerts because the book would be an important read. If you know David Segerts personally, put the suggestion to him again.