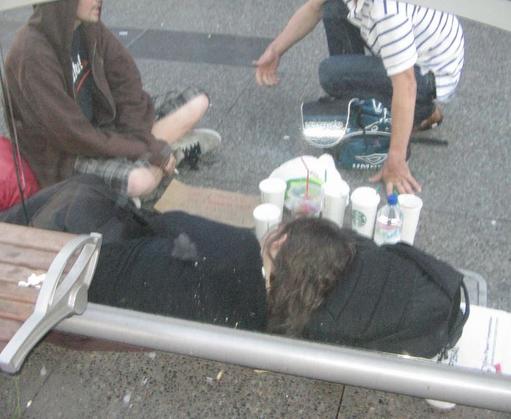 It was a deflating moment, having searched Value Village for the perfect jacket, the one that would keep him warm and dry come night-time, but also deliver to him something I had detected in him -- style. It was picked out deliberately with him in mind and I guess I had dreamt of some happy ending. Of course it was just a dream because the street is no picnic.

If you become familiar with a few of the homeless, some welcome your appearance and others will remain suspicious and defensive. That's the way it is. It works both ways. Some people are equally suspicious of the homeless -- who are they, what are these people about?

They're about a lot of different things. They are fugitives from justice, cast-aways from family and friends, mental health problems that fall through the cracks, severe drug addicts or alcoholics, or people who just don't want to try anymore. Arguably, the fugitives belong in the justice system, likely a prison cell. Somewhere on their life's path there is a corpse, or an injured person, a rape victim, a ruined child, and an unresolved criminal justice case.

Perhaps the jacket man wanted to maintain his sense of dignity in light of his situation. On the other side of the coin, the people who turn a blind eye believe not being seen helping the homeless will preserve their own sense of dignity. In the vast no man's land between, there's simply a lack of care and concern.

It's a strange world we live in. Sometimes you win sometimes you lose. A tent camp in Nanaimo was recently routed by nearby neighbours because they have kids and the purpose of Neighbourhood Watch is to protect kids, property, and sanctity of community. They don't need dirty needles, piles of garbage, and stumbling lost souls tramping the lanes and sidewalks at all hours of the day and night.

Jacket Man did not take the jacket, and I might have let it put a damper on the rest of the evening, "Don't be sad, don't take it to heart," said one of the street people I've become acquainted with. "People like him, they're druggies not right in the head."

But I was perplexed and I had taken it to heart because to me he was no different from anybody else in the world. He was cool, a refreshing character who I'd stopped to speak to a few times, a man of the world. He still is, but it's a smaller world.

'Late Dave' told me I was an angel and handed me a stone with the fossil of a fish . . . having happily accepted what I had to offer in a blanket and a small bag of food, whilst I watched another street person perform magic. This expat from Quebec was an actual magician and one ought to be forgiven for thinking the world might be missing out on his talents.

The same night I went past Old Jack. A few days previous I had delivered a blanket to Old Jack . . . but on this night he was left out, shivering on the curb, and he informed me the duvet in the carry case had been stolen.

He sat at the edge of downtown looking forelorn as the cold bit into his hands.  I gave him a pair of gloves and made him a promise. I went away and brought him back another blanket. Who is stealing these blankets and other possessions from the homeless? Would it be other homeless?

Earlier in the day I had stopped to talk to another of my street people who told me someone had been stealing homeless possessions, in one case the person responsible claimed to be manager of a local fast food restaurant but his claim proved unfounded. The loss of blankets is a harsh punishment on the streets, the temperature at this time of year is getting close to freezing and will only go lower.

"We need somewhere to store our stuff . . . ," Shaky James says, and that's the reality of street living, since there is nowhere to store personal belongings, nowhere to clean clothing and have a shower. Is there something that could be done to affect change?

Many say facilitating the homeless in the quest to be on the street is going to increase the problem. On the other hand everyone needs a good night's rest, everyone needs to be fed, everybody needs the dignity (and hygiene) of clean clothing and access to washroom facilities.

If we do not have it to give in society, how can we begin to focus on other tasks? These include but are not limited to supplying a home, helping people face their demons, which may also be our demons, as we all have the bloody things. One of the favorite quotes handed down to the homeless when they ask for help is, "Get a job!"

Perhaps I exaggerate Jacket Man's rejection, and perhaps I had no reason to feel deflated, in fact running around helping the homeless has been rewarding with unexpected results. One guy, Big John, stopped taking handouts and is now housed, helping on the street within an outreach program. Another 27 year old mother of three entered a treatment facility. I gave her a lift, she lifted herself after that.

One has to expect a few road blocks here and there. Accepting sometimes that help is not as readily available, that's hard. Just as accepting help will not always be readily accepted is hard. They don't give up so easily on the street. As my husband would say, however, for some of them it's a race, and the one who dies first is the winner.

I Don't Know What You People Are About 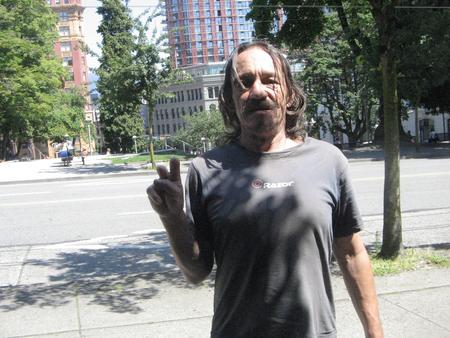