At present, forensics nursing is an emerging field in Canada, recognized by the Canadian Nurses Federation, and taught in a growing number of schools. Nurses in the day-to-day work in hospitals in Canada are involved in forensic nursing usually without having specialized training. Nurses in emergency rooms and trauma units are dealing with public health issues and interacting with criminal cases such as gunshot wounds or sexual assaults.

Many communities don’t have a forensic nurse examiner yet, and, in cities where they do exist often their practice is limited to sex assault and domestic violence cases. But forensic nursing is the fastest growing area of specialization for nurses in North America.

Forensic nursing got a head-start in the 1990s in the USA. This expansion of medical services comes in light of the billions of dollars spent annually on the health effects from violence, particularly sexual assault, which can result in post-traumatic stress disorder, depression, substance abuse, and suicide, and a plethora of physical ailments or diseases.

Forensic nurses are trained for dealing with sex assault victims and domestic violence victims. Patients are put in the care of professionals who have been trained to understand panic, fear, shame, and other emotions coursing through the minds of victims. As medical practitioners forensic nurses have wounds to tend, while at the same time their patients are demanding of a certain comfort during very difficult proceedings.

Urban health authorities have been plodding through the past 20 years adapting a workforce of on-call health care workers with forensic expertise that is a mix of medical care, emotional support, and criminal evidence collection. When dealing with a myriad of emotions, forensic nurses are taking care of more than wounds, furthermore, they are collectors of essential evidence, including semen, pubic hairs, blood samples, and photographs of injuries.

The job in the forensic nursing profession is to look after the physical and mental health of the patient first, then to assist police in making a case against a sex offender or violent partner. Demand is growing for forensic nursing teams to expand into child abuse, elder abuse, serious and fatal car crashes, or any violent crimes in society. Yet as late as 10 years ago forensic nursing was relatively obscure. Today forensic studies certification issues from several universities and while to this day most of the students are cops, more nursing professionals enter the study every year.

The process of gathering forensic evidence in sexual assault is a difficult task involving the 'rape kit,' which includes collection of semen and hairs, bagging of clothing, taking of photos, and conduct of a HIV risk assessment. A forensic nurse will be required to spend an average of four hours with a patient-victim, but this can go on longer. In more extreme situations the patient needs to be admitted to the hospital. One in five sex assault patients require medical care beyond the processing of a 'rape kit.'

In the opinion of many in the medical profession, “Every emergency department should have a forensic nurse.” Domestic violence presents different issues for the forensic nurse, and while an adult has the choice to not involve police, a forensic nurse may act to create support for a child that has been abused. Forensic personnel are trained in the collection of evidence, how to remove clothing without destroying evidence, how to package clothing by seeing to it that a 'chain of evidence' is maintained. They are trained to take notes that will hold up in court.

All these tasks require specialized training in forensic evidence collection, criminal procedures, expertise in making legal testimony, and other areas of legal, social, and medical interaction. In fact, these health professionals act as liaison between the medical and the criminal justice systems. Police find themselves with powerful allies trained as nurses who are entirely aware of the investigative concerns of police detectives, cognisant of the legal issues inherently important in preserving the chain of evidence.

Forensic nurses are primarily employed in hospitals, emergency or trauma units, but forensic nursing goes beyond the world of criminal investigation. It is a reality that disaster recoveries require identification of human remains. This can only be determined through the use of forensic investigation. They call this type of forensic work Medicolegal Death Investigation.

Randy Hanzlick wrote in the National Academies Press, “The medicolegal death investigation system is responsible for conducting death investigations and certifying the cause and manner of unnatural and unexplained deaths. Unnatural and unexplained deaths include homicides, suicides, unintentional injuries, drug-related deaths, and other deaths that are sudden or unexpected.” He notes that, “Twenty percent of the 2.4 million deaths in the US each year are investigated by medical examiners and coroners, accounting for approximately 450,000 medicolegal death investigations annually.”

Becoming a forensic nurse does not mean the practitioner will be involved with dead bodies, however, that is one path to take in the profession. Other career branches open to forensic nurses include expert medical witness, sexual assault nursing, nurse death investigator (medicolegal death investigation), community education, and other areas like investigation of traumatized patients from whatever the cause, be it assault and battery, attempted murder, and the list goes on and on.

The term forensic nurse emerged in the early 1990s and by 1996 forensic nursing was officially recognized in the USA by the American Association of Nurses. Multidisciplinary health care teams work closely with the survivors of traumatic injury or violence and with offenders and other professionals such as law enforcement. Training courses provide the student with evidence-based practice, forensic theory, research, practice concepts, and leads to further accreditation.

While nurses and doctors begin the healing of physical and psychological injuries, police and the legal establishment need evidence properly collected and preserved. In Victoria, for example, about 15 nurses have signed up to work as forensic nurses. These are nurses specially trained to deal with a victim's medical trauma, but, at the same time, to gather key evidence to put an assailant behind bars.

The forensic nurse can establish the necessary boundaries to restore a victim's a sense of autonomy. They can work to return self-control to a victim by offering options to evidence collection and police involvement. If the time is wrong to deal with police and begin a legal proceeding, a victim can put the decision off for days or weeks, even months. The standard practice for a forensic nurse is to store evidence, sometimes for up to a year.

Det. Const. Mark Knoop, of Victoria Police special victims unit, told the Time-Colonist newspaper that cases can arise when the duty to protect the public takes charge. “Then, officers must press for a chance to gather information as quickly as possible.” In such cases, he says, forensic nurses are trained to deal with a traumatized patient while gathering key evidence. Forensic nurses "are vital to us," Knoop said. 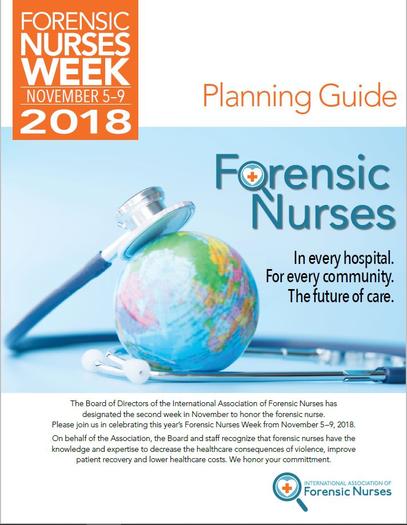