Buried in the Broughton Archipelago there lives the beating heart of anti-fish farm activism/anarchism on the west coast, possibly the whole world. Alexandra Morton sallies forth from an adopted home in Sointula, after a few years at Echo Bay, B.C., to regularly confront what she estimates is the scourge of oceans everywhere. This small corner of the world has played host to commercially-operated ocean net-pen fish farms since the late 1980s. Morton has spent, in her words, 30 years in "the fight," against the fish farms. That's half her life time, and more than the length of time fish farm companies have operated in the region.

Morton was dragged to court as late as in 2017 in a culmination of the past two years conducting ocean forays to hit spots on the B.C. coast with a pair of well-funded missions called "Operation Virus Hunter 1" and "Operation Virus Hunter 2." It is conceivable these missions could be renamed "Operation Virus Spreader," because the troupe of activist/anarchists led by Morton often smash disease prevention protocols related to health of fish in net-pens of privately owned, legally constituted fish farm operations.

In ongoing attacks on the fish farm industry, Morton has exploited an arguably divided demographic, First Nations. During her latest cacophony, she enlisted First Nation rights and title arguments whereas an equal or stronger cohort of First Nations declare themselves and their communities completely onside with fish farming on the Pacific Coast. So completely are communities onside that they invest in fish farming and depend on participation in the industry to a remarkable degree, owning net-pen sites, operating their own processing facilities, and managing their own corporate fish farm holdings.

Alexandra (Hubbard) Morton, born in 1957, had a childhood dream to study animals which led her to killer whales, first in an aquarium in Los Angeles, then to a natural setting, in B.C., at the site of OrcaLab on Hanson Island. Thus she arrived in the Broughton Archipelago in 1980 and Echo Bay in 1984. OrcaLab is "a small land based whale research station nestled against the evergreen forest of Hanson Island in the waters of the 'Inside Passage' of northern Vancouver Island." Morton began writing about the effects of fish farms on the orca in the Broughton.

Eleven years later, the work at OrcaLab continues, ". . . in August we had orcas almost every day. Not once did the thrill disappear when seeing black fins on the horizon or capturing them close-up on the rubbing beach cameras. Every time, I had that buzz in my stomach and felt my heart beat faster. I’m a fairly excitable person, and it was often hard to maintain composure and remember that there was lots of work to be done in the lab: tracking, counting and ID’ing the orcas!" (ORCALAB ASSISTANTS 2017 – SUZIE)

Suzie continues: "My favourite dive was the last one I did on the Critical Point hydrophone. Located in Robson Bight, it’s a protected area which means that it’s not open to pleasure craft, and as such has only been dived a handful of times. The crevace down which we ran the hydrophone cable was so full of life; giant starfish, crustaceans and small critters, and the drop-off where we positioned the hydrophone had so many fish! It was amazing to be there, knowing that this is the same space that the orcas use and that I am one of only a few to have experienced it."

ORCALAB ASSISTANTS, 2017 – KARIEN  "I can only hope that people can see how amazing the animals that we see here every day and create a bit of awareness on the challenges that the whales are facing today." "As the summer progressed and more orcas came though the area it became easier to know what to look for in a call and identify them only by sound."

From ORCALAB ASSISTANTS, 2016 – SHARI "The Orca pass by very frequently, and when they are not within filming distance, we keep a watch out. We continue to monitor the radio chat."

From everything they are saying out of OrcaLab, the oceans are pleasantly healthy and orca are abundant, so, fortunately, despite the presence of Morton, or fish farms, and due to the thriving orca, OrcaLab continues to receive lots of funding and plenty of free labour from 'biologists' and 'volunteers' with credentials and international reputations to uphold, who show up to document this abundance.

The community of Alert Bay is where the greatest number of lives are affected by Morton's ongoing war against commercial fish farms. Alert Bay is the centre for a few First Nation Bands, mainly Namgis, and people there live collectively in the glorious past of fishing fleets known for charting success 100 years ago. There is endless lamentation of the 200 or more fishing licenses that disappeared from Alert Bay all of a sudden in the 80s.

Walk the boardwalk past huge wooden edifices formerly housing fish processing plants where so many Alert Bay people were employed. The housing in the community must have been impressive in its day. There was a haunted Residential School on one end of the Indian Reserve. The community grave yards have amazing totem poles and a lot of great artists cut their teeth and huge cedar logs. Dominant artists like Bill Reid, Beau Dick and the Alfreds have called Alert Bay home. Beau died last year, so too did Marcus Alfred.

A recent court hearing in Vancouver brought to light how people in Alert Bay cannot have an opinion that leads away from the stark employment deficiencies of an Alert Bay existence. This unemployment yawns in front of them all day every day. Anybody who 'makes' it with a company like Marine Harvest or Cermaq is compelled to leave the community and take family and incomes elsewhere.

Anybody working for these companies is treated rudely and roughly. It takes a strong individual to meet the responsibility of becoming a contributing member of society. This is the work of Alexandra Morton and her narrow view of how the ocean is put to use by commercial industries.

Meanwhile, where do fish farm companies stand? On the side of the law, abiding by government regulations and looking to the wider court of public opinion for direction. There is a growing demand for employees in a growing industry. Colleges and universities up and down the coast are engaged in educating potential employees.

Liaison with First Nations is ongoing. Meanwhile it is one of the frustrations in the Broughton Archipelago that interference from actvists displaces the laying of groundwork for protocol agreements and other commerical initiatives. Blaming fish farms for salmon fishery collapses that have a much longer recorded history is frankly a mission of propaganda disinformation.

The truth about salmon is that it may no longer be wild anywhere in the world. Hatcheries have ended the existance of 'wild' salmon, for example, in Alaska, "In the mid-1970s, commercial salmon harvests in Alaska reached near historic lows (20 to 25 million fish) compared with the very high salmon harvests of the 1930s (100 to 126 million fish)."

The Alaskan report draws the following conclusion, "In general, declines in population productivity from habitat degradation and the nongenetic effects of overfishing have caused greater losses in productivity or population resilience than has genetic degradation. In the long term (e.g., over scores of generations), however, the harmful effects of accumulated genetic degradation within populations, loss of populations and the associated genetic diversity, and the accompanying hindrance of genetic adaptation to changing environmental conditions may equal or exceed the effects of habitat degradation and overfishing."

A word about the actions of the Broughton-centred activists, including Morton, Sea Shepherd Society, the now deceased Twyla Roscovich, and others. These activists gained a following out of junk science, rumour, innuendo, and hidden agendas they would never deign to share. Greg Renouf writes about these activists here:  http://www.genuinewitty.com/2015/10/17/green-party-candidate-funds-racists-astroturf-attack-on-first-nations-democracy-feat-lisa-barrett/ 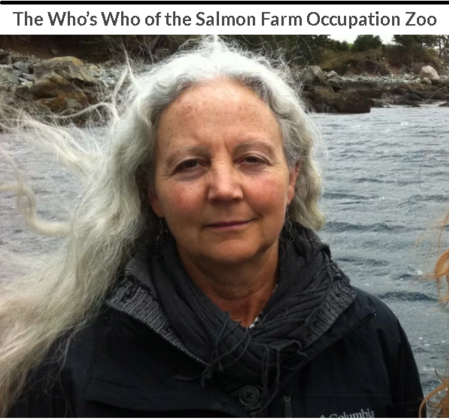