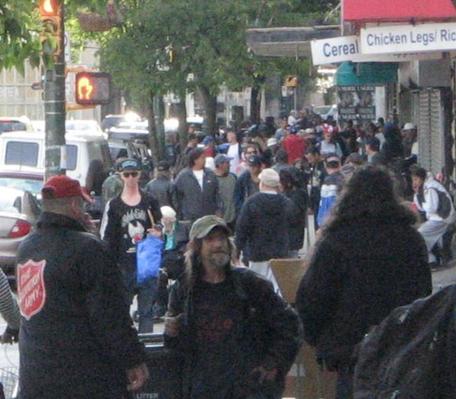 The Downtown Eastside (DES) is a neighbourhood in Vancouver, B.C., with a reputation for containing the most poverty-stricken and crime-ridden set of streets in North America, and the DES comes by the reputation honestly. The police have a one-sentence description regarding DES inhabitants: If you're on the streets of the DES you are a 'one' or a 'two,' either buying drugs (a "2") or selling drugs (a "1"). The area is carefully policed and closely surveyed but it's strictly a matter of containment. The causes of poverty and crime are examined as often as the poverty and crime are disparaged and wished away.

Every alley has a drug emporium. The available drugs span the spectrum with crack cocaine leading the list, followed by heroin, morphine, oxycontin, percasette, other pills, and the rest, now including the hyper-deadly fentanyl, and more recently carfentanil (elephant tranquilizer). The drug sales are made on the streets, in the alleys, and in front of police on East Hastings. The drugs of all sorts are consumed in the open air under close surveillance, often in front of police who make very few arrests. They tell drug users to drop what they are doing and step on it. The drug users scowl in defiance and step on the glass pipe, enraged that a hit has been erased. No charges are laid. Suddenly, however, in recent years the rate of overdose deaths has climbed to nearly 1500 per year, from less than 250 per year five years ago.

The DES is a neighbourhood composed of SRO (single occupancy hotels) with rooms at a few hundred dollars a month (the cheapest in Vancouver), and a pestilence of cockroaches, mice, and rats that can never be eradicated, despite fruitless fumigation on a regular basis. Welfare pays the bills for practically all of the rooms. The people are unemployable addicts to a man, woman, and sometimes child. Nine and ten year olds, usually female, are seen on the street flapping like torn flags in the faces of passersby. The prostitution is a drug exchange. Nobody wants money, they want drugs, and mostly they want crack cocaine.

Everybody in the DES is a patient of a doctor for their countless ailments, and a dentist to pull rotten teeth. They each have a social worker to hear nightmarish lamentations, and the most important connection is a trusted source that delivers a constant flow of anaesthesia to be smoked or injected or swallowed. One psychiatrist who works in the neighbourhood says the area has an invisible fence that contains the mayhem within the Downtown Eastside. The local 'convenience' stores sell drug paraphernalia that is found in everybody's hand, glass pipes and some 'brillo,' the metal captures cocaine distilled into rocks that melts instantly and creates a vaporization that fills the lungs and instantly rushes to the brain.

Drugs are rarely 'fronted' on speculation, but when it happens a $60 debt can cost a person their lives. To pay the debt they search for things to sell; they sell prescriptions of a lesser favourite to buy the greater favourite, stereos are sold whole or in pieces. Musical instruments for sale include guitars and keyboards; electronic gadgets include cell phones and battery chargers; bicycles are sold whole or in parts; cameras, rolls of tape, shoes new and used, articles of clothing; everything is 'boosted' or stolen from stores, cars, and hotel rooms. All the windows and doors of the businesses in the DES streets have steel bars, including the stores selling drug paraphernalia.

Hundreds of homeless addicts live in the street next to their shopping carts full of empty bottles and other useless garbage. In the depth of winter these homeless people bundle up tight and huddle in a doorstep, along the wall of an alley, or lay down on East Hasting Street. The scene is a sight to behold if chaos is your cup of tea. Food is delivered to the street at all hours of the day and night by community associations and church groups. Lineups converge and queue to feed on noodles, macaroni, sandwiches, and soup, then disperse with renewed energy to engage in the pursuit of addiction.

It is important to remember these are suffering people. They are unfortunate and tormented and despondent in their destitution, but they can be friendly. They can be trusted for nothing yet they will share what they have as long as it isn't drugs. They will share a toothy smile and a laugh when they can muster it.

A person stood on the corner of Columbia and East Hastings under a sign that reads FAST FOOD, was munching on a chunk of fried potato, a house speciality and remarkably good food, where moments earlier, inside FAST FOOD, he had asked, "What's that music?" of the guy behind the battlement of freezers and food displays. "Farsi," he replied, "from Persia," to which the customer replied, "Well it's charming," which caused the owner to break into a beautific smile, "and thanks for the potatoes." The person then stepped out the front door of FAST FOOD when a guy ambled up wearing a Confederate Civil War hat (the losing side), and said, "Holy shit, it's good thing I didn't light up my pipe," he pointed his crack pipe while gesturing at five Vancouver Police Department constables in uniform collected in a circle kiddy corner on East Hastings Street.

The man in the civil war bonnet reiterated that he was about to smoke a rock of cocaine, and no one had reason to doubt it. The man with the potatoes replied, "Yes it might be a good idea to wait a minute," and the man in the war bonnet laughed. Suddenly two of the police break from the meeting and cross at the light to other side of East Hastings, to the corner opposite FAST FOOD, and the two police, man and woman (whose hair is tied up in a bun by a clasp) begin to march further south toward East Pender. The man with the potato remarked, "Those cops should be wearing helmets," at which the guy in the civil war bonnet turned, and said, "I LIKE your attitude."

The humanity in the DES contains a despondency that allows for occasional laughter and sympathy, but mostly mockery, and continuous drug-induced confusion. People are twitching, stumbling, falling, and failing to see anything of the lighter side of a human existence. It's all darkness all the time. Two police officers, burly men, were patrolling on foot past one of the dark alley scenes of immense drug trafficking, and as they neared the entrance to the alley, they call out "Six," mockingly, knowing the word means, "Police," and with that, it would call forth a ridiculous frenzy of effort to conceal the activities. The police grinned to each other as they heard "Six" echo half way down the dark corridor filled with people selling, buying, and consuming the illegal drugs that rule the DES. There is nothing the police can do except join the mockery.

This is the neighbourhood where Robert Pickton went on a nightmarish killing spree racking up a body count that has no definite number, though it believed he killed over 50 female drug/sex trade workers. Pickton was arrested and convicted of killing six. Meanwhile the mayhem continues and will do so for as long as the world turns. Vancouver has an insoluble problem that cannot be stopped. The police strategy is to contain the drug mayhem to the DES and let the suffering people have their way. The body count is going to go far higher because addiction leading to insanity and death is the only constant. With the introduction of fentanyl the body count has been skyrocketing to 622 between January 1, 2016 and October 31, 2016. It shows no sign of abating.