Before and after pictures showing the addition of a French drain. Before the addition of a drainage ditch, the house was chronically flooding in the spring or during heavy rains. The basement is now dry and the occupants are developing the basement.​ 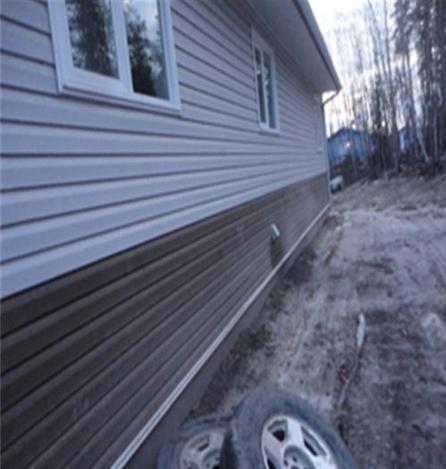 Despite its name, the French drain may not have come from France. In his 1859 book, Farm Drainage, Henry Flagg French popularized the use of trenches filled with gravel or roofing tile to drain surface water off farm buildings, while protecting the surrounding soils from erosion. Improvements over the years include the use of manufactured pipes, embedded in gravel, to allow the water collected to flow freely. In today’s home, we use the same concept to protect foundations from groundwater by installing perforated pipe (weeping tile) leading to a catch basin (sump pit) for final dispersion outside the building. We also see it in sewage systems where sewage is treated in two-stage tanks, discharged into a weeping bed, where the effluent percolates into the soil in chambers covered with gravel.

Swales are often used to divert surface water run-off from houses, but can be ineffective over time, due to soil erosion or frozen water. Weeping tiles have proven very effective in controlling ground water, and can be just as effective in controlling surface water run-off, by controlling the route the water takes. In their purest form, French drains are ditches filled with gravel, but with the addition of manufactured products such as drain tiles, or culverts, the home can be isolated, reducing the chances of water damage.

1. Start by determining where you want the final dispersal point to be. That can be a drainage ditch, dry well or catch basin, where it can be diverted to the community’s stormdrain system. The catch basin can even be part of a rainwater-collection system. It can be as simple as a buried rainwater barrel. Locate buried utility services by using “Call Before you Dig.” You don’t want to dig up a gas line or electrical service.

2. Determine the highest spot in your yard. When you dig the trench, excavation will slope downwards toward the final point of dispersal. One inch of slope for every eight feet will ensure the water can move freely through the pipe. One thing to keep in mind: If your intent is to protect your house from water, construct the trench four to six feet away from the foundation. The trench will surround the home, in most cases, in a U shape.

3. Dig the trench bearing in mind the slope. A trench digger is a good option, as it will have minimal impact on the surrounding grade. There are attachments made for bobcats, or you can rent from an equipment-supply company. The trench can be a foot wide or three feet wide, depending on how much water you need to move. Bear in mind that the wider the trench, the more gravel you’ll need. Eighteen inches in depth is a good starting point. That should keep it above most services.

4. Install a bed of gravel two inches thick to serves as a base for the drainage tile.

5. Lay the drainage tile keeping in mind the slope. Perforated pipe should be laid with the perforations down. This will prevent fine soils from entering and clogging the pipe. Even better, use fabric-wrapped pipe, which is easier to use than installing filter fabrics.

6. Fill the trench with gravel, level to the surrounding grade. If you're not using fabric-wrapped pipe, install a filter fabric above the pipe, embedded in gravel. Some people use landscaping gravel, which comes in a variety of colours, to enhance the landscaping on the top six inches. 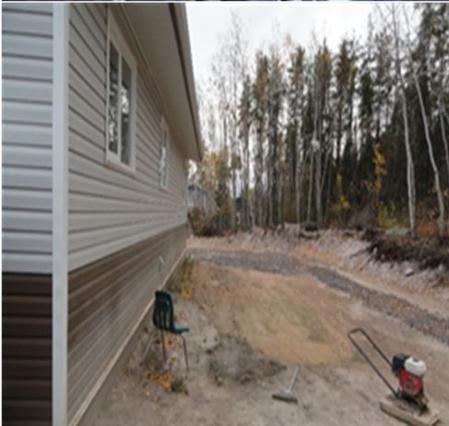