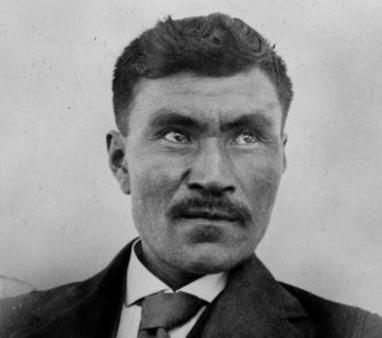 Rick La Violette is a life-long logger and this is no mean feat because, along with being a self-motivated licensed contractor, when you are a logger, you are often equally a survivor. It is one of the most dangerous occupations known to man, outside of, say, fightin' the terrorists.

La Violette started dreaming of building a First Nation logging outfit when he was a young man working around Burns Lake, B.C.. Soon La Violette was off to greener pastures, in fact, he went to Kispiox, B.C., west and north of Burns Lake. It was within the traditional territory of his mother who is granddaughter of Gitxsan hereditary chief Walter Neil Sterritt.

Grandfather Sterritt once owned the same 170 acres that La Violette owned beside Gitanmaax Indian Reserve, near Old Town Hazelton, B.C.. "He was Wi Gagk, a clan house chief in the Gitxsan Ayookw," La Violette explained. "He had land and title over a large traditional territory and ended up with this 170 acres that I live on. I didn't know he owned it when I bought it, but I found this out shortly after."

He found out much more, "It was this neck of the woods that Simon Gunanoot evaded arrest for 14 years," before Gunanoot finally turned himself in, said La Violette. Simon Gunanoot was a prosperous Gitxsan man who was accused of murder in 1906 and became a fugitive in Gitxsan territory with his wife Sarah and their entire family of eight kids.

"He used to take a trail across my grandfather's property to go to Hazelton at night," says La Violette, "He would sneak into the movie theatre because that was the big thing in those days." Simon Gunanoot even had the famous Pinkerton's Detective Agency chasing him down without success. He later emerged to face justice and won his freedom in a New Westminster, B.C., courthouse in 1919.

Jerry Higginson has a Gunanoot story too. "I hired on in my first job as a faller," explained Higginson, "in an outfit operated by the Burns Lake Indian Band, and one of the reasons I went there to learn logging was because Rick La Violette was the foreman."

Higginson's family were logging in B.C. for as long as the industry had become the annual mega-project that it is today. Higginson says that even as a young man Rick La Violette had the reputation for being a straight-shooter who worked hard and delivered the most timber to the yard. Everybody worked piece-meal so they wanted to work with crews that delivered the most timber, and with La Violette they were guaranteed to pull down large paycheques.

One night Higginson was driving to Burns Lake, B.C., and picked up a hitchhiker on Highway 16 West who turned out to be one of Simon Gunanoot's sons, Simon Gunanoot Jr.. Simon didn't talk much if at all. He grew up speaking Gitxsan in the vast wilderness and eschewed English and the rest of western society although he could speak English fluently as did his educated father.

That night, a short time after he picked up Gunanoot, it was just the luck that Higginson got pulled over by police for a tail-light infraction. In the back of his pick-up truck lay his faithful Chesapeake, an animal entirely familiar with his master's driving habits. The dog hung back and laid low in the truck box.

Well the officer was aggressive and forcefully demanded all relevant documentation and looked over at Gunanoot, "Got some identification?" he further demanded.

In that instant the huge Chesapeake shot up beside Higginson's left ear at the open driver's side window. It's fangs bared and emitting a long low growl in the face of the suddenly placid police officer. Higginson's documents landed back in his lap and the cop backed away telling them all to have a nice night.

For the rest of the ride to Burns Lake, another 40 km at least, says Higginson, "Simon Jr. said two words, and they were the only two words he said that evening, 'Good. . .' and a little while later, '. . .dog.' I never laughed so hard in my life."