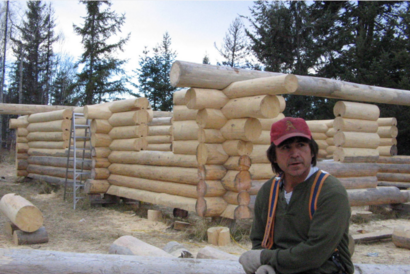 A key goal for Sylvia Olsen was to establish a national First Nations building Inspector program in education, an accredited course in housing management, and Olsen was involved with Nancy Hamilton at Vancouver Island University (VIU) in developing the curriculum for housing managers to become certified First Nation housing inspectors.

Olsen knows there is a patchwork of regulations in First Nation housing. There is no national building code on-reserve and regulations about housing are done reserve by reserve. What are the main impediments creating national standards for building inspections and housing departments on Indian Reservations in Canada?

Obviously first and foremost it's money. Building codes and related inspections and enforcement are done reserve by reserve. There is no cash to pay for education and salary of qualified building inspectors. It is the opinion of people like Olsen that it's time to bite the bullet, for government to implement a wide-spread national blitz to create housing codes for First Nations equal to the National Building Code of Canada. Olsen believes that some will continue to refuse, and it will take more time and effort, but it requires something other than the piecemeal approach.

"What will force it is new home ownership coming on reserve, a trend that is occurring amongst both young and old who are getting private mortgages." Olsen suggests they will be concerned with protecting the assets they have purchased. "Band offices by and large have no capacity to do it, managing properties does not take priority in council and Bands often lack administrative capacity for managing residential and commercial real estate."

It takes doing the legwork on training to build capacity to administer codes, including those which apply to people with mortgages for example.

Development of housing is done amid a lack of qualifications where building inspection may not be entirely desirable by Band Councils, which is ultimately why the regulatory approach has to be national.

Olsen was finishing a Ph.D on housing, and continues to teach and consult on Aboriginal housing around Canada, was a course facilitator with VIU, where the university has had very active students from around B.C.. Housing managers are taking the course. Some started and found it was more to handle than they thought, and others have remained dedicated to the present program.

They are delivering the course over about three months on-line, and VIU is receiving interest right across the country. Olsen says VIU has been persistent in delivering the program. She has been across the country to numerous reserves, witnessing housing managers improving housing in First Nation communities. She has traveled to distant points, including northern Ontario for two months where portfolios of Bands contain every housing hurdle imaginable.

Olsen comes by her experience in First Nation housing from more than three decades living on Tsarlip Indian Reserve near Victoria, B.C., “I met my husband and moved there when I was 17 years old and I raised my family there,” she says. “It's a very nice place to live. I worked in housing at Tsarlip beginning in the early 1990s.”

The creation of accredited courses was initially pursued by the First Nation National Housing Managers Association (FNNHMA), now defunct. Olsen was a founding member of FNNHMA in 2006. She worked in provincial and national Aboriginal housing committees over the years. She immersed in the study of First Nation housing based on the history of Aboriginal housing development in Canada. Olsen has other interests, is a storyteller at heart, was a writer-in-residence at Carson Graham School in North Vancouver, B.C.. “I am a member of the Victoria Storytellers Guild.”

Olsen worked with Mike King a Housing Manager of Beausoliel First Nation in southern Ontario since 2000, and Nancy Hamilton at VIU Distance Education Department. King says, “We work-shopped the idea of a housing managers certificate program with CMHC when we started in 2006. We received funding from CMHC to visit housing trade shows and conferences, get a website established, and start developing a proper job description for  housing management.”

King says, “It's really all about property management on-reserve. Property management comes into it because the area of responsibility grows when you consider the tens of millions of dollars in property management we are discussing. It involves rents, mortgages, and asset management. A lot of these administrative functions are being done on a part-time basis." Much more is needed to be done.

FNNHMA may have folded but success was in the wind for Olsen. They developed the program at VIU. The first module of certification was piloted in three locations around B.C., in 2008/09. Fifteen students took the course in Nanaimo, and other classes were held in Terrace and Kamloops. She was initial facilitator teaching the course in the hope that along with certification, a complete curricula including finance, administration, communications, and construction management would be developed. Once it was all put together, VIU would work to encourage national certification.

The Atlantic provinces received pilot programs. Pilot courses were delivered in Moncton and Halifax. They were coast to coast with the program and there was strong interest in Quebec Aboriginal housing for working out the language questions to certify in Quebec. Organizers have always felt the urgency to get the program going is on a national basis.

VIU dedicated resources to developing a unique program. The Nanaimo-based university applied for program funding as an exceptional school. At the same time they recognized it was a First Nations initiative. One of the main battles was to establish appropriate financial remuneration for certified housing managers.

“Finding the wage for certified housing managers is one of the challenges. You have precedents out there but a great deal depends on the financial state of the Band.” Even so, “Across Canada we have some of the most amazing people working in housing management on reserve,” and, Olsen noted, “The force of their expertise and a certification process will help make housing management certification a national reality," eventually.

Housing on-reserve is changing. “Lots of people are working to resolve the structural issues in First Nation housing. Poverty remains the main problem in housing. Another problem is that housing remains entirely government-run,” whereas other social activities like health and education have been taken over by the First Nations. “Aboriginal housing will eventually be,” she says, “under the direct control of  First Nation leadership.”

Some of the emerging leadership came from FNNBOA, "It's been a long time coming," said Richard (Bud) Jobin (who passed away in 2015), regarding education initiatives to certify housing management officers in First Nations. Jobin had said, "We have supported them from the beginning." Jobin was director of FNNBOA and was working for a over a decade to arrange education of First Nation building officers qualified for housing inspection.

FNNBOA focused its effort with people like Nancy Hamilton at Vancouver Island University to make the housing management and inspection skills transferrable to the mainstream economy. FNNBOA was dedicated to higher standards, and Jobin believed they needed the inspector course at VIU to deliver transferrable skills. Jobin had noticed that the province of B.C. was supportive of FNNBOA in the process of seeking national standards for First Nation housing professionals.

FNNBOA Winter 2014 newsletter contained a stark reminder of the necessity for change in First Nation housing standards, "Cold winter weather in Canada conjures up images of skating on outdoor rinks and tobogganing. Unfortunately, it also brings fire losses and deaths, especially in First Nations communities. This happened recently in Pelican Narrows, Sask., where two boys died in a house fire. Fire deaths among Canada’s First Nations people are the highest in North America. The fire incidence rate is2.4 times greater per capita than that for the rest of Canada, the fire damage per unit 2.1 times greater, the fire injury rate 2.5 times greater, and the death rate 10.4 times greater."