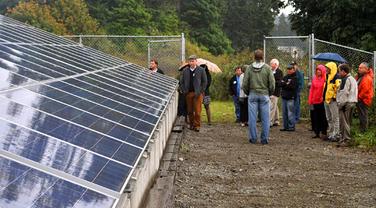 T'Sou-ke Nation is a community on the south-west corner of Vancouver Island, busy not only culturally but economically, since they achieved construction of the largest solar array in B.C.. Linda Bristol is an Elder, Arts Manager, and Cultural Advisor who was engaged from the beginning of a Comprehensive Community Planning process that began in the last decade. Out of this community engagement came the powering of the community with solar renewable energy. “The process was vision-oriented and we had a progressive-thinking group. One of the options was solar energy and it caught the imagination of the people creating the vision,” says Bristol.

Success of the T'Sou-ke solar energy project came from the T'Sou-ke CCP process, she explains, and unity was the key, “We are 220 members living on the far west coast of southern Vancouver Island, and we wanted to lessen the imprint we make on our environment. We are right on the very west coast and relatively rural. The call to the community brought people together for the vision sessions.”

T'Sou-ke feels the effects of industrialization on their immediate surroundings in their location on the southern end of Vancouver Island. “As a youngster I remember we could dig for our clams right on the beach in front of our house (facing the Sooke Basin),” says Bristol. “Clams are gone, as are cockles. That is on our radar for further action to repair our beaches and waters.”

She says community members remained engaged throughout the CCP process with a goal to create employment for families and share knowledge with other First Nation communities. A number of community members became certified installers of solar hot water heating systems and PV systems out of the work done on T'Sou-ke administration buildings and housing in the community. The CCP planning was aiming to dispel notions that First Nations are sitting back and waiting for government to provide solutions.


Visionary processes are something ongoing in T'Sou-ke, “It's not solar-exclusive. We have a community greenhouse growing vegetables for the community. We have introduced a canning program for preserving vegetables and jams grown in our greenhouses and gardens.” Bristol is the art manager for T'Sou-ke, an  important role within a community that has boundless history in the culture of making art.

She mentors an arts and culture revival and arranges courses on Salish basket and grass weaving, and Coast Salish wool weaving. “We are bringing this program along further with cedar gathering and wool spinning instruction. We are very proud of our communities and we overcame a lot of hurdles to bring about the Vision in Progress,” said Bristol. She wants people to understand that T'Sou-ke Nation has always had a close involvement with the wider community of Sooke and Victoria.

The T'Sou-ke solar array came about through partnerships and special relationships with businesses. Home Energy Solutions is a company dedicated to Solar Energy and  green energy solutions. Ed Knaggs, then Vice President of HES, was completely engaged in the T'Sou-ke First Nation solar demonstration project on the south-west end of Vancouver Island, and says this pilot project was initiated to prove the overall viability of solar energy in B.C..

“It serves as a green energy prototype and they are sharing the solar water heating and direct energy model as a potential new energy program in other First Nations. It's a great demonstration of solar energy working in a place that has the right amount of sunshine,” says Knaggs. “HES did the solar engineering and installation training of T’Sou-ke installers and we found the T'Sou-ke to be a shining example of a community dedicated to green energy solutions.”

T'Sou-ke has made an effort to inform First Nation chiefs and leaders on how to make the power reading meter spin backwards on the 25 houses composing the solar array. Spinning meters backwards means T'Sou-ke Nation is adding energy to the BC Hydro grid and making money for the community. “They've done it and are showing the pathway to others.”

Knaggs has been involved with delivering solar systems for years, “Solar started off with NASA when the energy source was needed for space stations.” He said it hasn't changed much in the years since photo-voltaic (PV) panels were designed, because when it ain't broke don't fix it, “Panels last a very long time and come with a 25 year warranty.”

The panels are made in Germany and USA. The total cost of installing the solar array in T`Sou-ke was $800,000 and that delivers 75 KWh (the average home uses 6 KWh) of clean renewable green energy to 25 T'Sou-ke homes for water heating, and electricity to T`Sou-ke Nation administration offices and buildings.

Knaggs says the cost rose because electrical upgrades to existing houses were included whereas the solar component cost about $500,000 of the total $800,000. The Net Metering Program of BC HYDRO enables T'Sou-ke to push electricity back onto the grid, furthermore, he notes, solar energy around the province has seen increases year over year.

Knaggs was pleased to be associated with T'Sou-ke, “They mentored this in their community and partnered with us to put it all together. Advances are coming in the array and the price of existing technology is coming down at the same time as the price of other forms of power is going up.” He says that solar energy works in tandem other forms of renewable energy, recently the industry has been consulting on joining multiple forms of electrical generation into year-round power generation in off-grid communities.

J. Scott organized a special solar conference at T'Sou-ke Nation in the middle of 2009, “We had a full house,” she says, “and we held different sessions to show the effectiveness of solar in off-grid situations, and as supplemental power, and as a return on investment by delivering power to BC HYDRO. It comes down to T'Sou-ke being a sustainable community that can grow with the times, and it all grew out of a year and half long vision process that looked at energy scarcity and sustainable development for T'Sou-ke community,” a vision process that Andrew Moore of T'Sou-ke administration, arranged for the community.

Hemmera Environmental was part of the project and Michael Stephen was  Environmental Scientist who worked closely with Chief Gordon Planes and Andrew Moore. “They've shown a lot of leadership in this project,” says Stephen, “and T'Sou-ke Nation turned to Hemmera as a diverse environmental company that could show the way on community planning for a sustainable future.

“T'Sou-ke are traditionally involved in fishing and logging. Those industries are not doing well at this time. When T'Sou-ke Nation received $400,000 in ICE (Innovative Clean Energy) Funds from the province in 2008 I was excited because Sooke (the immediate municipality) is my home town and I was anxious to see (the adjacent First Nation of T'Sou-ke) develop other areas of their economy.”

Stephen entered the picture when a comprehensive Visioning process was near completion, “One of the main things for T'Sou-ke was to attain energy autonomy. Second main thing was to share the knowledge through the Potlatch philosophy with other First Nation communities. I came into the picture to help T'Sou-ke identify extra funding opportunities and write a tool-kit for other communities gained from the T'Sou-ke experience.”

Stephen prepared a tool-kit based in good measure on the off-grid components of the project, “The innovative thinkers at T'Sou-ke designed the project to be a model for off-grid communities, very forward thinking, to make a case study completely integrated with the renaissance of culture in the community.” Stephen wrote the tool-kit as a visual presentation, “not overly wordy,” an artistic and visual presentation of this culturally appropriate project, he says.

Tyler Finnie was just 20 years old as one of the solar installers who trained on the T'Sou-ke Nation Solar Demonstration Project and he recounts, “two weeks of classroom time teaching us safety and how to work on ladders and rooftops. Then we were paired off with certified installers and worked on hands-on installation of the hot water solar systems.” Tyler says the program went very well, starting with assisting and integrating us further into the process each day.”

It took roughly about a month to learn the ins and outs of the electrical and plumbing that becomes part of a solar hot water heating array, “That was the first array, hot water heating for 25 houses. The solar electrical array came next. It was pretty much a similar experience but it went faster. We saw how fast we learned. The canoe shed installation was our group's own installation, the largest array that incorporated Coast Salish art into the design.”

The solar electric demonstration was brought to near completion by the two crews of installers, “From here there is more hot water installation to do, and T'Sou-ke has a second little village farther to the west. There are strong winds there and the planning calls for further green energy production, although the wind is definitely a different kind of solution.”

Finnie enjoyed the training that leads to positive items on his resume, including a move into office work on the project, “I'm adept on a computer,” and in the future he plans to pursue further education on the environment, “It's the right way to go. We just had a sweltering heat wave. Things are getting bad for the environment.” Installing solar electric arrays will provide a good base-line of employment in the interim. Finnie says, “It was a good crew and we all knew each other well. The solar forums had good crowds.” and the folks were impressed by the outcome of the project.

Jessica Bekker is an electrical engineering student at University of Victoria (Uvic) who worked on the T'Sou-ke solar array as a Co-op summer student completing part of her mandatory program towards her degree, a four-year Electrical Engineering degree that provided her with a variety of interesting experiences including one summer doing recruitment of Aboriginal students at UVic.

Bekker started her career-oriented post-secondary education at Camosun College in Victoria and transferred credits to UVic and as the degree came closer she found the desire to study renewable energy during a course on sustainable energy systems, “I knew I wanted to apply this knowledge to First Nation communities.  Photo-voltaic is amazing high-technology that really works on off-grid situations.”

She arrived in the T'Sou-ke community when the solar project was in full bloom and the momentum was moving to the finish, with 75 KWh of new energy assembled within about six months. It's low-maintenance with no moving parts. There may be some battery maintenance but very little else.

Bekker said the T'Sou-ke project was laid out in four different arrays, “Two of the four systems have battery banks of 16 batteries each. These battery banks are expensive, about $5,000 each. Batteries introduce inefficiencies, whereas the other two arrays are direct solar to electrical systems.” She said batteries serve a purpose in supplying power when the other arrays are dormant in darkness or low-sunlight conditions.

The two T'Sou-ke Nation administration buildings contain a total of 35 kW that is a direct electrical energy  installation to power up  offices, and there is a 40 KWh array that demonstrates  direct solar energy being sold back to the grid. Bekker says that in her opinion of the overall project, “It was $800,000 well spent.”