In recent years, a new priority in fire protection has emerged in British Columbia (B.C.). "Structure protection trailer units have been put in service by the Columbia Shuswap Regional District (CSRD) and other jurisdictions. Structure Protection Unit are used to protect homes, commercial buildings and all structures threatened by Wildland fires," said Jake Jacobson of Wildwood Resources Ltd. in Salmon Arm, B.C..

Jacobson says the province has several Structure Protection semi-trailers that are dispatched quickly with trained personnel to communities that are threatened by a wildfire. "Fire Department and private trailers are located all around the province." The usefulness of this equipment is apparent to any experienced firefighter.

Wildland Resources Ltd. offers forest fire fighting training courses, some of which are delivered online. "If WorkSafeBC requires that you have the annual S-100A Refresher Course, it is now available online to anyone with a current S-100 ticket. The course fee is only $20," says Jacobson. "Go to www.s100a.com or phone 1-250-832-2300.

"My involvement with fire prevention, fire training and fire fighting includes many years in a volunteer fire department, Regional District Emergency Programme and working as a Fire Warden for the Ministry of Forests," says Jacobson.

"In 38 years, I can see a difference in fire behaviour as climate change is definitely altering the environment. Today we have to throw out all the old models on fire prediction and behaviour. New data and forecasting ability gives us a greater ability to respond, but the demands are increasing."

Jacobson says, "We had a wildfire in Salmon Arm in 1998 that burned up the side of two mountains, and this landscape has not recovered in any substantial way. Some grass and shrubs have returned but in 25 years it's not coming back to the same condition it normally would."

As fires burn hotter, the natural regeneration process of a burned forest can be stopped. This happens in a dramatic increase in a fire's intensity. B.C. has been witness to unusual torrents of hotter fires. Pinecones and seeds that survive a normal wildland fire get destroyed and desertification of the soil becomes a new reality. Jacobson looks at an example of this out his window at home.

He runs the S100A course at www.s100a.com, "The people taking the course have changed a lot.” It used to be the BC Wildfire Services would hire local people to fight wildland fires. Jacobson would maintain a list of 20-25 qualified local individuals that could be called upon to do initial attack. They were known as EFF’s, Emergency Fire Fighters.

Over the past 10-15 years the use of EFF’s through out the Province has been greatly reduced and now the BCWS relies on government crews, contract crews and industry.

“The full S100 course and the annual S100A refresher course is required by anyone fighting a wildland fire in BC.  Today we see Tree planters, loggers, road builders, silviculture workers and blasters all take the course. Now urban and rural fire departments are also taking wildland fire fighting training because bushfires are encroaching on towns and cities. This has become more pronounced in the past few years."

Obviously cities are spreading out, Kamloops, Salmon Arm, Kelowna, Vernon, all have faced severe fire events in the past two decades. Spreading the knowledge about fire mitigation and prevention has become essential, because, while fires are seasonal in nature, they leave generational imprints on society. Witness the disappearance of Lytton, the town in B.C. that went up in smoke in hours in 2021, 250 people in the southern Fraser Valley burned out of their homes in less than an afternoon.

The S100 is a two-day course designed by the B.C. Ministry of Forests. The first day is classroom delivery of information about fire behaviour, fire weather, different types of fires, safe firefighting methods and a lot more.

On the second day, we go out to the field, with the proper clothing including helmets, gloves, boots and learn how to use shovels and Pulaski’s to build fire guard. The students also learn how to set up and run high-pressure pumps, deploy fire hose, do fire assessments and all of the practical duties found on a safe job site. The day culminates in the students forming fire attack teams and going after an imaginary forest fire.

And make no mistake. When raging forest fires are splashing across the news, the people in the field are trained to put the safety of themselves and their co-workers first.

Jacobson says, "What they shouldn't do comes first. I preach Safety, Safety and Safety. All of the” safeties” in that statement are the important, but the second safety is the most important," he jokes.

"Learning how to read a fire is critical. Understanding what a fire wants to do can save your life. Structure fire fighters look at a fire for a few minutes to decide what they are going to do. A wildland firefighter may look at the fire for ten minutes to decide what to do." The difference is often clear, a structure fire burns the structure, but a forest fire burns a countryside.

"It may just start coming after you! Escape from the fire is always the paramount concern so a lot of time is spent on learning fire entrapment avoidance. We want our firefighters to get home safe and sound so we can send them off to an even uglier fire the next day.

"Our Initial Attack (IA) crews usually consist of 3 firefighters, a 4x4 truck, portable pump, hose and hand tools. They are tasked with getting to the fire quickly while it is still small in order to slow it down or contain it. If the fire is beyond the crews capacity they call for other crews, air tanker support, or heavy equipment such as bulldozers”

Jacobson says this is done, "quick as possible. We use the 10 a.m. concept. Most fires start in the afternoon and we may work through the night in order to contain them by 10 a.m. the next morning. After 10 a.m. conditions start to heat up again and the fire intensity increases.

"Often it only takes a few hours to contain or extinguish a small fire. We had over 1,600 fires last summer and only thirty or so became real problems."

The mandated emergency protocols put responsibility on industry to respond to wildland fires within one km of their work site. Management needs to respond with trained workers. Railroads, BC Hydro and First Nations have an agreement with the BCWS to respond to fires on their land or right of way.

Jacobson was introduced to the practice of wildland fire fighting during the Salmon Arm Eden Fire in 1973. "We had one of our worst fires start on Sept. 19th after a long hot dry spell. It eventually burned 6,000 hectares right beside the city and prompted the first large scale evacuation in B.C.’s history."

Central and Southern Interior of B.C. has various landscapes and ecologies, including steppe desert near Kamloops. It gets extremely hot and dry by July and August, sometimes June. Jacobson has witnessed big fires as late as September and smaller fires in November and as early as late March. “That's a long time each year to be sitting on the edge of a chair," he says.

"If you're working in the bush you must have the two-day S100 certification. WorkSafeBC requires the S100A Annual Safety Refresher be taken each year. The S100 is the minimum standard in the field but there are more advanced training courses for initial attack crews."

The S185, he says, is a wildfire entrapment avoidance course, "The term 'Fire Entrapment Avoidance' indicates a situation where proper strategies have been put into place and well thought out tactics are employed in the fire fighting efforts. These strategies and tactics must be put in place before any fire fighting activities begin."

In the past two decades the forests in the province of B.C. have faced serious challenges, like the Mountain Pine Beetle infestation. "I've never been on a MPB fire, but I've heard it rips through it like dead grass."

The forest fire fighting industry is a boots-on-the-ground business, "We have an extremely good safety record in B.C. forest fire fighting. We have very few injuries, and almost no fatalities. This is because we stress safety, and crew leaders don't take chances. What's burning is just trees, they can be replanted and homes can be rebuilt but you cannot replace a dead firefighter!"

BCWS and fire departments have been very good at building capacity to fight fires with the right emphasis on personal safety. "Sometimes people may be watching news reports of the growth of a wildland fire, but I can assure you, inaction is always based on safety. Coordination of resources is critical. A water drop from an air tanker may not do any good if there are no crews to go in after to extinguish the fire once it has been slowed down."

Working out the logistics of aerial attack, ground crew deployment and heavy equipment is critical to successful fire attack. "If you see firefighters sitting around on a news stream, it is probably because the air tankers, bulldozers or dangerous tree fallers are in they’re doing their job first."

Jacobson reflects on the changes in the southern Interior region of B.C. over the last 40 years. People are building into the forests and are fully surrounded by trees and brush. Fire prevention measures are being taken in the interface areas but the main responsibility lies with the individual homeowner to reduce the fire hazard on their property.

Jacobson is familiar with the FireSmart Program. (Source https://firesmartbc.ca/) What is FireSmart? Wildfire is a risk that all British Columbians need to be prepared for. But while that seems like a big task, FireSmart is here to help you get started and take proven steps toward protecting your home and your community from wildfire.

Jacobson says, "When roads and access routes are cleared, siding on buildings is metal and clearings permit vehicles to turn around, the fire fighters have more confidence about going in to fight the fire. Check with your local authority to see if there is anyone in your area promoting the FireSmart programme."

At www.s100a.com, the following courses are described in detail:

S185: Fire Entrapment Avoidance and Safety: This course covers information required by a wildland Firefighter to avoid being trapped by a Forest Fire. 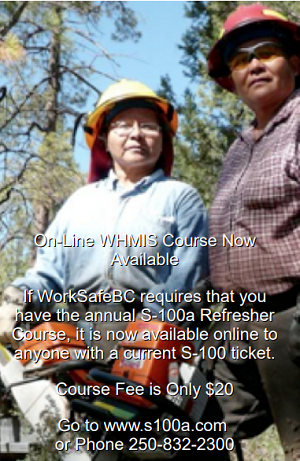