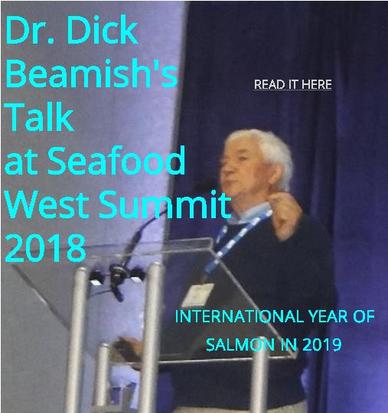 Ed. note: Funding was arranged for a second North Pacific Salmon Study in 2020 Expedition, Covid 19 intervened on the reporting phase.

​Dr. Richard Beamish is expecting the return of an international team of scientists from the Gulf of Alaska on or about March 18. They set off from Vancouver on February 18. "The work is proceeding better than expected," says Dr. Beamish. "They have had good weather and they are exceeding all expectations in covering the areas of the gulf to be studied."

The scientists studying fish and oceans in winter conditions in the Gulf of Alaska come from Russia, Korea, Japan, Canada and USA, "They are getting along very well. Conditions on the ship are good, although all the instructions and signage are in Russian," it's a Russian vessel after all, "and language barriers do exist among the crew and professionals, everybody is getting along very well, the food is great."

They are finding the catches smaller than may have been anticipated, however, since it's never been done before, nobody really knew what to expect. "They are catching all species of salmon. The majority have been chum salmon. They have plenty of samples, there's not much left of the fish they catch," everything is preserved for the vast amount of study underway on the ship and that which is to come in Vancouver at the University of British Columbia.

This anchor-project in the 2019 International Year of Salmon has been developed by Dr. Beamish and funding has come from a variety of sources, including $200,000 from the BC Salmon Farmers Association.  See https://yearofthesalmon.org/gulf-of-alaska-expedition/

John Paul Fraser is Executive Director of the BCSFA, "We are all anxious to see and learn about the findings," of the Gulf of Alaska expedition, "so that we can better tackle the problems together.

"BC’s salmon farmers are proud to be a founding sponsor of this expedition, and we are all anxious to see and learn about the findings," says Fraser.

"As Dr. Beamish says, there’s a ‘black box’ out there in the North Pacific that we have shed no light on."

Fraser adds, "And because of Dick’s brilliance and perseverance, the salmon community is coming together to cast a ‘Beamish’ of light on the unknown challenges the salmon face."

A scientific expedition sailed into the Gulf of Alaska in the month of February of this winter with scientists from Korea, Japan, USA, Canada, and Russia, "We're surveying as much of the Gulf of Alaska as we can in 25 days," says Dr. Richard Beamish. "All species in the gulf waters are being studied," and, with 2019 being declared the International Year of Salmon, obviously a focus will be made on this iconic species.

There are 50 people onboard the Russian vessel to conduct the experiments, 21 scientists, and 29 crew, technicians, and assistants. The expedition is a first-ever mission to study the ocean ecology of these important fish, about 1/3 of all salmon are in the Gulf of Alaska in the winter and this includes Asian chum salmon. "Overall we are going to have an estimation of the numbers of all salmon," says Beamish. The expedition will have DNA evidence of the origins of the fish. Eighty percent of the fish in the study are most likely to be chum and pink salmon.

Salmon in the gulf will be coming from a variety of sources, "A percentage of pink salmon will have been reared in hatcheries." Fish arrive in the winter to compete for available food, "Winter is when the food for the fish is at a minimum. Thus we will calculate the 'carrying capacity' of the gulf with the purpose of evaluating effective stewardship of fish resources."

Several hypotheses have been tabled, for example, "We intend to learn the most efficient use of hatcheries. Commercial fishing effects are also part of the science. There is annual demand on salmon fish stocks. With the operation of salmon hatcheries around the Pacific Rim, there are concerns that the hatchery fish impact wild salmon. A major reason for the expedition is to understand the basic mechanisms in ocean science."

Pink and chum are the most prevalent and probably the most observable. "This study has never been done to this extent, although the Japanese have gone out and done about 10 sets on one occasion, and about 15 sets on another."

Observations will be made on growth rates, age of the fish, and fish health. "We will test the hypothesis that abundance of these salmon appears may be determined by the end of their first year in the ocean.

We will look to see if the fish that grow faster, quicker in the first months at sea show the greatest chance of survival." Dozens of measurements will be taken, including extensive observation of the present state of oceanography.

"We are looking at the presence of plankton, predators, and salinity," says Beamish. "The issues of climate will be closely examined. Salmon inhabit the top 40 metres of ocean and temperature conditions affect the presence of plankton. Plankton is a major part of the diet of pink and chum, but not the exclusive food, squid is major, and small fish."

The program for this scientific expedition was put together by Dr. Beamish, "It was privately arranged. The scientists agreed to gather data and take it to the University of British Columbia to be shared for the purpose of study and reporting." Beamish wasn't on the voyage to the gulf departed Feb. 18 and returning to Vancouver Mar 18., "I'm too old."

The data will be assembled and preliminary reports will begin to emerge by the fall of 2019. "DNA evidence takes time to collate." One of the questions they are hoping to answer is, why is the commercial fishery for salmon experiencing some of the highest catches in history? Last year the Russians caught 640,000 metric tonnes of pink salmon which was their highest catch in history.

The scientists want to provide mechanisms for discussing sustainable harvesting practices, especially in light of changing climate and ocean conditions.

"As a society, we want to be the stewards over what's available and have consistent returns of fish to the rivers. One of the amazing things about salmon on the west coast is how they rarely go to extinction of the fish in the rivers. Other species across the country such as yellow perch, walleye pike, can have complete failures in some years. But such events are very rare here with salmon."

Even so, Beamish notes, the trends on salmon abundance on the Fraser runs have been going downward in the past 30 years. "The 2009 run of sockeye returning to the Fraser was the worst in history and there has been a declining trend since the early 1990s. However, the return in 2010 was the highest in history. Chinook salmon in the Fraser River are also declining in abundance. It is important to understand the mechanisms that cause these trends and this is a main reason for the expedition. " WEBSITE FOR DR. RICHARD BEAMISH 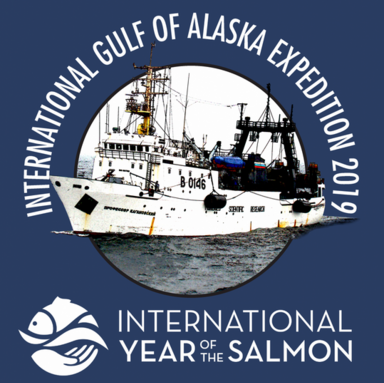