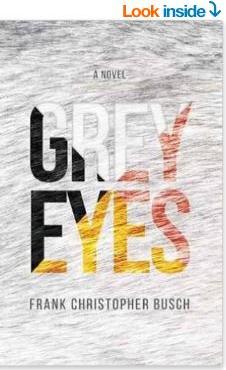 Frank Busch wrote the novel, Grey-Eyes, Teaching of the Buffalo and signed a publishing deal with Fernwood/Roseway to release the book in the autumn of 2014.

"They say there are egos in publishing," says Busch, "but I am an accountant. I'm looking forward to the critiques," he said. "I want to see where I made the mistakes and really learn the craft."  Busch is writing a seven-book series on Cree life in the historical period predating contact with Europeans. Each book carries the theme of a specific teaching passed down from Cree ancestry, and Busch is using a fictional setting to impart seven essential codes in Cree society.

Busch was born and raised in Northern Manitoba. He lived in the setting of this novel (he is currently writing book two in series) that begins in the area of modern day Nelson House, Manitoba. In his youth, Busch's community was composed of people who continue to live in immediate proximity of their inheritance, "I was a kid in fish camps on South Indian Lake and Reindeer Lake." He was nurtured in the Cree society that may have been torn asunder by the intensive systemic attack but retains a giant legacy hidden and protected by a resilient lexicon of Cree language and the speakers of Woodland Cree.

In this work of fiction, Grey-Eyes are people born into society with a gift, powerful and benevolent in nature, they have the innate ability to bring together and marshal the powers found in creation and individuals to unite and protect community, and perhaps the leading gift from the Creator is respect. Respect is the main gift from the Creator that builds community and it comes from the Buffalo, which embodies the essence of the spirit of respect. "I designed the story to tell the traditional First Nations view addressing social ills such as gossip, nepotism and community politics." The story is Busch's analysis of how society deployed its human resources in a matriarchy. "Women governed society. They ran it then just as they run it today."

Busch earns the attention of the audience by using spell-binding scenes with those living in close proximity to one another's clans, and nature; the strong narrative voice of Painted Turtle Man peels the layers of society off in small but explosive revelations, a birth, a sweat, a naming ceremony, a passing generation leaving a powerful legacy to the next, for others nothing comes easy in this world as legacies are lost, and not all is equal or egalitarian for that matter. The antagonist is a dangerous and deadly, in fact, relentless, foe. Respect it turns out is a hard thing to keep no matter how much it is deserved.

The next several books in the series are mapped out, "The next books will tackle bigger issues. In book two, which has a working title Grey-Eyes: Teaching of the Bear, the theme is about courage. I am going to write about murdered and missing women, about the lack of courage in modern society that is not calling out for help, is looking anywhere but at the problem."

Writing with a strong narrative voice and perspective that carries wisdom and suffering was a learning process that begins with where he was born, and departed, but in which he found himself fully engaged later through the Residential School healing process. He had a job taking testimony from residential school survivors who were making their case to the awards commission. He had to hear the message two ways, from the legal perspective for the law firm he worked for, and from the perspective of the people who had to tell their difficult stories.

"The antagonist Red Eyes and protagonist Grey-Eyes characterize the success and failure of leadership, how one form of power is about elevating others and is not selfish and another form of power is about people who only help themselves. The magic is the individual gifts and how they are deployed." The magic in the book is based on fundamental truths underlying Cree society transformed into the mystical experience that people make their lives out to be. There is a remarkable method of imparting wisdom of the ages underway in the writing of this young author, Busch is Manitoba born and raised presently living in Westbank, B.C..